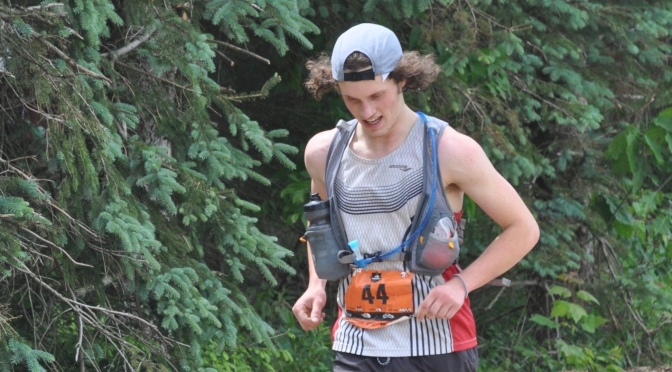 With just one ultramarathon finish on his resume prior to the 50-mile race on Saturday, June 8, at The North Face Endurance Challenge in Princeton, Mass., Noah Howard’s victory likely turned a few heads.

A man who raced alongside Howard during last year’s TNFEC 50-miler at Wachusett Mountain surely saw it coming, however.

“Noah’s a beast,” was the matter-of-fact comment from Michael Pulli, a resident of Medford, Mass., following the 2018 race when he and Howard traded places several times throughout the day and shared numerous miles together. Pulli placed fifth that day (9:24:36) and Howard finished sixth, clocking a time of 9:25:12 on the same course he returned to on Saturday.

Now 23, Howard came back stronger, wiser and faster – much faster. The resident of Northampton, Mass., spent the first 21 miles racing nearly stride-for-stride with 20-year-old Rylan Flint of Williamsburg, Va., and 27-year-old Bryan Kerl of Leadville, Colo. The trio traded leads and were never separated by more than about a minute. Flint fell off the pace after 21 miles while 24-year-old Ben Eysenbach of Pittsburgh, Pa., entered the mix. Kerl led for most of the next 10 miles while Howard and Eysenbach followed close behind. After 31 miles, however, Kerl dropped from the race. It was Eysenbach’s turn to move to the front while Howard lurked about a minute back. Eysenbach had a 22-second lead on Howard when he arrived at the final aid station and mile 44.4, but that advantage soon evaporated. Howard surged to the front and steadily pulled away during the final 5 1/2 miles. What had been an unpredictable, neck-and-neck race for more than seven hours ended with Howard winning by 22 minutes in a course-record time of 7:52:58. Alexander Jinks had the previous record of 7:54:48 from the 2018 race.

Eysenbach finished a distant second to Howard in 8:15:10. Rounding out the men’s podium on the warm and sunny Saturday was 40-year-old Brian Rusiecki of South Deerfield, Mass. While a few of the younger runners burned themselves out in the fierce battle at the front, Rusiecki ran his own disciplined race and gradually picked off runners during the final half of the race to climb from sixth to third in 8:34:01.

The women’s race also saw a 2018 competitor rise to the top in 2019. Kehr Davis finished fourth in the 50-miler a year ago (10:53:20) in what was her final tune-up run before the Manitou’s Revenge 54-miler two weeks later in New York, a race she would win for the third year in a row. Davis returned to Wachusett Mountain on Saturday and the 42-year-old from Pittsfield, Mass., was in top form. She was the first woman to the top for each of the early climbs to the summit of Wachusett Mountain before slipping behind Rachel Bainbridge and Karen Benway for a few miles. Benway, 47, of Williston, Vt., led the way into Leominster State Forest followed six minutes later by Bainbridge, 32, of Arlington, Mass., and then Davis another minute back. Davis reeled in Bainbridge by mile 21 and then spent the next 10 miles tracking down Benway. By the time Davis reached mile 31 she was back in front with a three-minute lead. It was a position she would never relinquish, and she ultimately won with a course-record time of 10:09:15. Bainbridge finished second in 10:16:45, also dipping under the previous course-record (Katelyn Tocci’s 10:17:35 from 2018). Benway rounded out the top three in 10:23:45.

In the 50K race, Amy Rusiecki led the women’s field from start to finish and the 39-year-old from South Deerfield, Mass., won by a comfortable 21-minute cushion in 6:35:18. The runner-up, 28-year-old Rosalie Lipfert of Cornish, N.H., spent the day working her way through the field and climbed from eighth to a second-place finish in 6:56:54. Sarah Edson, 33, of Hermosa Beach, Calif., ran steadily in third throughout the day and ultimately finished there in 7:02:33, followed less than three minutes later by 47-year-old Kimberly Battipaglia of New Haven, Conn., in 7:05:00. Maria Efimova, 52, of Richmond Hill, Canada, rounded out the top five in 7:10:10.

In the men’s race, Reme Laprade, 25, of Gatineau, Canada, led the field through both trips to the summit of Wachusett Mountain, maintaining a one-minute lead on 28-year-old Ja Shua Ried of Red Hook, N.Y. Reid overtook Laprade as they made their way toward Leominster State Forest. Once in front, Reid never looked back, gradually pulling away during the final 15 miles on his way to the win in 5:03:21. Ed Cullen, 31, of Rumford, R.I., came on strong during the second half of the race and moved up to place second in 5:06:06. Coree Aussem-Woltering, 29, of Ottawa, Ill., was a distant third in 5:20:18, followed by Laprade who faded to fourth in 5:29:31. Jack Bailey rounded out the men’s top five. The 40-year-old from Medway, Mass., was steady throughout, racing consistently between fifth and seventh place, and ultimately finishing fifth in 5:51:17.