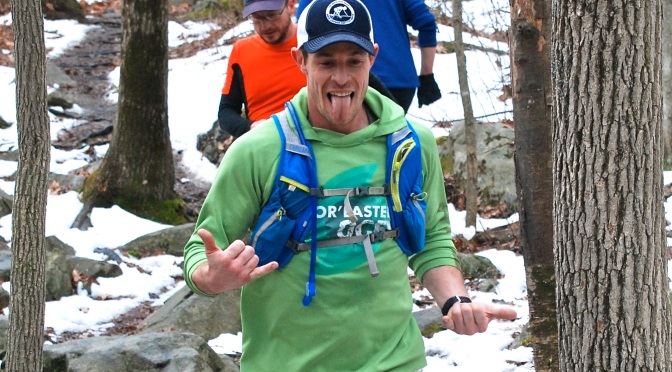 Thanksgiving loomed just five days away, but Joshua Fiore wasn’t at the Trail Animals Running Club’s second annual TARCkey Trot 6-Hour Run on Saturday, Nov. 18, hoping to burn off a few extra calories before chowing down on a holiday feast.

Instead, Fiore came to the race at Wright-Locke Farm in Winchester, Mass., and Whipple Hill in neighboring Lexington with his sights set on a much grander goal four weeks later. END_OF_DOCUMENT_TOKEN_TO_BE_REPLACED

Massachusetts residents eased into Thanksgiving week with a pair of in-state ultramarathons to burn pre-Turkey Day calories at the TARCkey Trot 6-Hour Ultra and the Village Ultra 10-Hour Run. That made for a quiet Nov. 18-19 weekend for Bay State runners at out-of-state ultras – but there were a few. Runners headed as far away as Utah, and stayed as close as Maryland and New York City to log some big mileage before the holiday weekend. END_OF_DOCUMENT_TOKEN_TO_BE_REPLACED

The Trail Animals Running Club’s second annual TARCkey Trot 6-Hour Ultra and 5K trail races took place Saturday, Nov. 18, on the trails of Whipple Hill and Wright-Locke Farm in Winchester and Lexington, Mass. The course consisted of a 3.1-mile loop that runners circled either once in the 5K race or as many times as they could within the six-hour time limit in the ultra event. END_OF_DOCUMENT_TOKEN_TO_BE_REPLACED

No matter the distance – short or far – Kelsey Allen has had a mighty successful 2017 racing season. Allen, 34, of Wendell, Mass., has already been the women’s champion at the Seven Sisters 12-mile race, the fourth-place female at the Cayuga Trails 50-miler, and the overall champion of the Monroe Dunbar Brook 10 1/2-Mile Trail Race this year. On Saturday, Nov. 11, Allen added another victory to her resume as she earned first-place female honors and placed seventh overall at the Mt. Tam 50K in Stinson Beach, Calif.

The course challenged Allen and the other 75 finishers to race to the top of Mt. Tamalpais and back down while taking on extensive singletrack trail with 6,800 feet of climbing along the way.

Runners had eight and a half hours to complete the race. The top three overall runners finished in less than five hours, led by 36-year-old Bradley Schoultz of Seaside, Calif., who claimed the outright victory in 4:45:34. Allen was seventh overall and five minutes out of the top five while placing first among the ladies in a speedy 5:10:23.

Allen wasn’t the lone Massachusetts resident to take on Mt. Tam. Boston resident Rachel Schneider, 31, was the 11th-place female in 6:46:41.

Claire Wallace made her first ultra of 2017 a good one. The 33-year-old resident of Somerville, Mass., traveled west to Terrebonne, Ore., and took on the 50K distance at the Run the Rock 50 on Saturday, Nov. 11, at Smith Rock State Park and the Crooked River National Grasslands.

Wallace successfully navigated the course’s singletrack and doubletrack trails, dirt roads, and 4,500 feet of climbing while spending her day among the faster runners in the field. She placed 14th overall and was the fifth-place female finisher in 5:18:49 – just 10 minutes away from earning a spot on the ladies’ podium.

Additionally, 37 runners completed the 50-mile race. None were from Massachusetts.

Mei-Ling Smith has been a regular at the New Jersey Trail Series – One Day event during the past few years. She made her third straight appearance and fourth overall at the event on Nov. 11-12 at the Sussex County Fairgrounds in Augusta, N.J., and this year she recorded her most miles ever.

Smith, a 40-year-old resident of Boston, Mass., completed 52 laps of the flat, one-mile loop for 52 miles. That was good for 38th place overall and 11th-place female honors. Her previous most miles at the event was 50 in 2015.

Sixty-six runners took part in the 24-hour race led by 52-year-old Serge Arbona of Parkville, Md., who logged 132 miles. He was one of eight runners to log at least 100 miles. The first-place female, 54-year-old Connie Gardner of Akron, Ohio, finished with 106 miles.

Runners also could choose to run a 12-hour, 6-hour or 50K ultramarathon. No Massachusetts residents took part in those events.

In addition to the ultramarathon distances, the event also offered a marathon. The top two overall finishers of that race were Massachusetts residents who also swept the men’s and women’s titles. Beverly resident Alen Yen, 46, was the overall marathon winner in 3:44:00, while Sudbury resident Mairi Burfoot, 48, finished second overall and was the women’s marathon champion in 3:49:53.

Aliza Lapierre doesn’t run the Stone Cat 50 every year, but she’s unstoppable when she does.

She won the race in 2007, 2009 and 2011, the latter two of which produced the two fastest times on the women’s course record board leading into the 17th running of the event on Saturday, Nov. 4, at Willowdale State Forest in Ipswich, Mass. END_OF_DOCUMENT_TOKEN_TO_BE_REPLACED

A trio of Massachusetts ultrarunners snagged last-minute Western States qualifiers at Rio Del Lago, Mark Leuner outlasted most of the field at a tough 100-miler in Texas, James Gawle defended his 24-hour title at the Hamsterwheel in New Hampshire, and Samantha LeBlanc threw down a tough 50-miler in Virginia at Mountain Masochist. Strong late-season ultramarathon performances abounded Nov. 3-5 beyond the Bay State borders, and we’ve got them covered in this week’s roundup. END_OF_DOCUMENT_TOKEN_TO_BE_REPLACED

From the desert heat of Arizona, to the finally arriving New England fall in Rhode Island, to the plains of Kansas and the lakefront in Chicago, ultrarunners from Massachusetts took on diverse climates and courses beyond the Bay State on Oct. 29-30. This week’s roundup takes you to the Javelina Jundred, the Rhode Island 6-Hour Ultra, the Kansas Rails-to-Trails Fall Classic, and the Chicago Lakefront 50-miler. END_OF_DOCUMENT_TOKEN_TO_BE_REPLACED