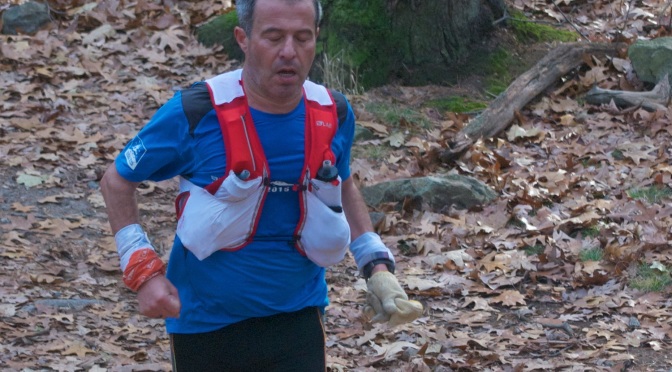 Dima Feinhaus was a few minutes removed from finishing his annual run of the Fells Winter Ultra 40-miler at the Middlesex Fells Reservation on Saturday, Dec. 2, and was chatting with friends when he received a tap on his shoulder.

Feinhaus turned to see another friend, Ryan Triffitt, with a grin on his face while holding out his cell phone.

“You just got into Hardrock,” Triffitt said, reading from the Twitter feed of the Hardrock lottery as a stunned look appeared on Feinhaus’ face.

Sure enough, Feinhaus’ name was drawn in the “everyone else” category of the lottery that is for runners who have completed Hardrock between one and four times. There are also categories for “never started” and “veteran” Hardrock runners. A total of 2,114 runners were entered in the lottery with hopes of claiming one of the 145 slots (45 for Never Started; 33 for Veterans; 67 for Everyone Else).

Feinhaus, 54, of Waban, Mass., first ran Hardrock in 2013 and finished 54th overall in 40:46:41. Since then, he has entered the lottery yearly in pursuit of a return trip, but his bids came up empty each time until now. He quickly accepted his spot in the field, and he will toe the starting line of the Hardrock 100-Mile Endurance Run for the second time on Friday, July 20, in Silverton, Colo.

Feinhaus is the lone Massachusetts resident to secure a spot in Hardrock for 2018, but there will be other familiar faces, too. Jeff List, who recently moved from East Falmouth, Mass. to Anacortes, Wash., had his name drawn in the lottery for the eighth time. The 58-year-old has finished Hardrock seven times and was selected in the “veterans” lottery.

Charles Hornbaker, another former Massachusetts resident who previously lived in Brighton and now lives in Los Altos Hills, Calif., was selected to run Hardrock for the first time.

Other New Englanders who were selected in the lottery were Adam Wilcox of Candia, N.H.; Ben Wyrick of Tilton, N.H.; Mike Weigand of Middlebury, Vt.; Levi Burford of Antrim, N.H.; and Jeff Rome of Bangor, Maine, all are headed back to Hardrock with prior finishes under their belts. Gregory DePetris of Guilford, Conn., and John Fegyveresi of Quechee, Vt., are headed to Hardrock for the first time.

Former Winchester, Mass., resident David Huss, now of Seattle, Wash., is on the Hardrock waitlist a year after finishing his Hardrock debut in 35:48:08.

Four-time defending champion Kilian Jornet of Spain will return to the race for the fifth time.