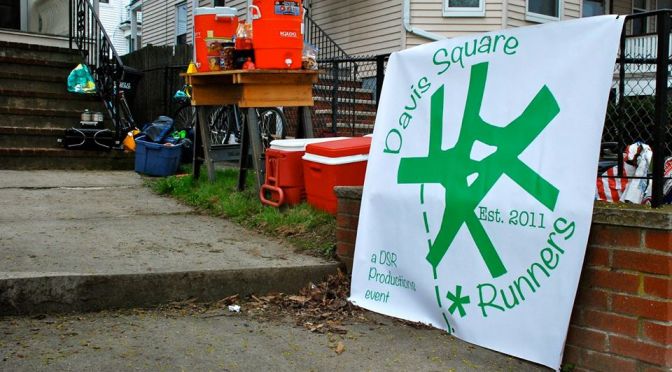 More than two-dozen runners gathered in the front yard of club member Fernando Salcido’s house, which served as the start/finish and aid station for the event.

Runners had eight hours to log as many miles as they wanted while following the event’s unique “Choose Your Own Adventure” format.

From Salcido’s front yard, runners scattered in all directions and pursued routes of their own choosing to log miles on the terrain of their choosing, be it sidewalks and streets, the Minuteman Bike Path, a local track, or the trails of the nearby Middlesex Fells Reservation. Runners would periodically return to the start/finish location to check in, update their mileage total to race director Su Mittra, and then head back out for more or settle in for a relaxing afternoon in the shade while cheering on other runners.

Notable route choices included James Fullerton and Katy McKeough stopping by more than a half-dozen local breweries along their chosen route, and T.J. Poole started his day by running to the starting line of the GK 5K Run to Build in Cambridge – and then won that 5K while wearing two race bibs (one for the 5K, and one for the 8-hour run). From there, he returned to Salcido’s front yard to check in, and then headed to the Waltham Sheep Shearing Festival where he documented his visit with photos before returning to the start/finish. Another runner, Nancy Tran, crafted a route where she spelled out her name.

Final mileage totals will be updated when they become available.