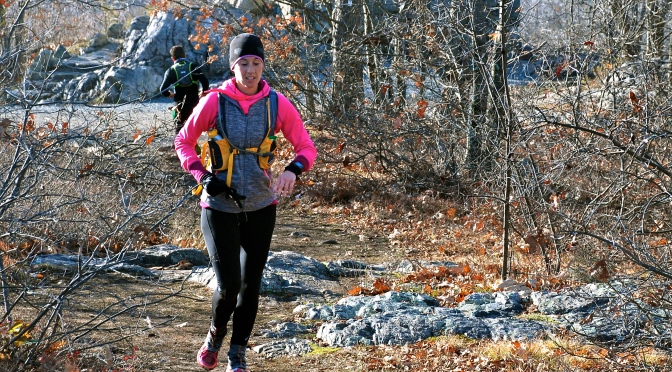 Defending champions Rob Levey and Kara Spera reigned again as both turned in faster performances than in 2016 on a day that was picture-perfect for running with sunny skies, a light breeze and temperature around 50 degrees.

Levey, 42, of Somersworth, N.H., repeated as the overall champion as he navigated all five loops of the single- and doubletrack trail course in 4:20:11, nearly 15 minutes faster than he did in 2016 and about 26 minutes ahead of the second-place finisher. Meanwhile, Spera, 34, of Lynn, Mass., improved her time by more than three minutes, finished sixth overall in 5:25:20, and was the top female performer once again.

While Levey held his ground at the top of the podium for the second year in a row after a steady ascension (third in 2014; second in 2015), runner-up David Diriwachter is laying out a similar path. After a fourth-place overall finish in 2015 and fifth-place showing in 2016, the 47-year-old from Vineyard Haven, Mass., earned a second-place finish in 4:46:02. Brendan Chambers, 38, of Taunton, Mass., placed third in 4:53:43 in his Cape Cod 50K debut and was the final runner to finish in less than five hours.

Although Levey ran away with the men’s victory, a close battle played out for the top spot among the women. Spera, who in 2016 defeated the second-place woman by 22 minutes, held off runner-up Nancy Kleinrock by a four-minute margin. Kleinrock, 56, of Ithaca, N.Y., was seventh overall in 5:29:34. The third-place female and ninth overall finisher, 42-year-old Heather Barackman of Woburn, Mass., finished close behind in 5:31:26.