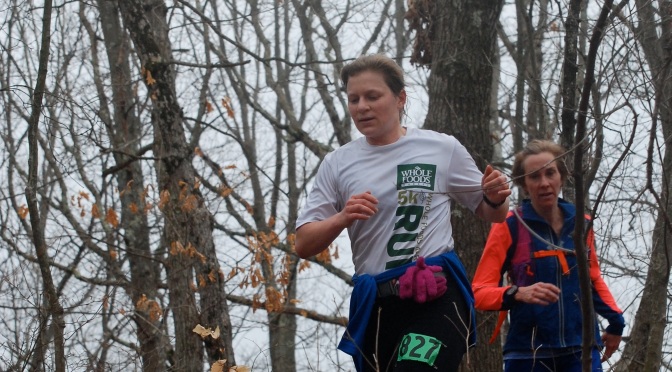 From the West Coast to the East Coast, Massachusetts ultrarunners continue to pile up strong performances. That includes an overall first-place finish by Cambridge resident Jenny Hoffman at the Lumberjack 100-miler in Washington, a top-10 performance by Boston’s Joe McConaughy at the highly-competitive Lake Sonoma 50-miler in California, a top-10 finish by Boston’s Will Holets at the Merced Canyon 44K in California, and Brian Rusiecki secured his third straight victory with a win at the Traprock 50K in Connecticut.

These four big races are featured in this week’s roundup.

The foundation for Jenny Hoffman’s trail and ultramarathon racing career was established on the West Coast where she found success on the trails of California in the mid-2000s before moving cross-country to Cambridge, Mass.

Hoffman has enjoyed her share of success in New England in recent years, but she reclaimed a bit of West Coast glory on April 8-9 when she competed at the Lumberjack Endurance Runs in Port Gamble, Wash., and earned the overall victory.

Hoffman, who is a member of the U.S. National 24-Hour Running Team, was a front-runner from early in the day as she navigated the 12.5-mile loop of singletrack trails and dirt roads quicker than anyone else in the field. She was the first runner to eclipse 50 miles, and she maintained her position at the front through the finish line. Her winning time of 22:19:00 was more than two hours faster than second-place overall finisher and first-place male Kyota Konnai, 38, of Seattle, Wash. She also posted the third-fastest 100-mile time by a female runner on the course in the event’s eight-year history.

One week removed from making the East Coast’s presence felt at the high-profile Gorge Waterfalls 100K in Oregon with a top-five finish, Joe McConaughy of Boston, Mass., was at it again with another strong performance out West. This time, he raced to sixth overall out of 300 finishers at the highly-competitive Lake Sonoma 50-miler on Saturday, April 15, in Healdsburg, Calif.

The trio of Canaday, Jones and Mocko broke away from the field and did battle at the front with 31-year-old Canaday of Boulder, Colo., winning in 6:17:55. Jones, 26, of Durango, Colo., finished second in 6:20:49, and 31-year-old Mocko of Mill Valley, Calif., finished third in 6:24:28. McConaughy was with the next pack of runners which included 30-year-old New Yorker Jared Burdick and 27-year-old Zachary Szablewski of Newcastle, Wash. Szablewski finished fourth in 6:53:14, followed by Burdick in fifth place in 6:55:26. McConaughy crossed the finish line sixth in 7:05:30, six minutes ahead of the next pack of runners.

The back-to-back top-10 finishes for McConaughy follow a 2016 where he won the Trail Animals Running Club’s To Hale and Back 6-Hour Ultra and the Stone Cat 50-miler, and they bolster the racing profile for the former Boston College track and cross country runner who set the fastest known time on the Pacific Crest Trail in 2014.

Patrick Upchurch was the second of three Massachusetts runners to take part at Lake Sonoma. The 33-year-old resident of Jamaica Plain turned in a strong showing with a 34th-place overall finish in 8:46:01 that landed him in the top 12 percent of the field.

The lone female competitor from Massachusetts was 52-year-old Marilyn Oberhardt of Arlington. Oberhardt returned to Lake Sonoma after last racing the event in 2013. She posted a 41-minute improvement on the course from four years ago, finishing this year’s race in 13:02:21. Oberhardt will return to the West in July when she takes part in the Tahoe Rim Trail 100-miler in Nevada.

A large pack of Massachusetts residents packed the course for three loops of Metacomet Trail singletrack and forest roads at the eighth annual Traprock 50K on Saturday, April 15, at Penwood State Park in Bloomfield, Conn.

Nineteen Bay State residents were among the 100 finishers of the 50K as they conquered around 33 miles and 6,000 feet of vertical gain on the rocky, technical terrain. None covered the course faster than Brian Rusiecki, 38, of South Deerfield, Mass.

Rusiecki set the tone with a strong start by circling the course in 1:29:07. A pack of others gave chase a few minutes back, led by 23-year-old Bill Cahill of Columbia, Md., 25-year-old Koby Nelson of Gales Ferry, Conn., and 35-year-old Jim Sweeney of Albany, N.Y., who were all about six minutes back. None managed to close the gap on Rusiecki during the subsequent loops, however. Sweeney was the only one who didn’t fall far off the pace, but even he couldn’t reel in Rusiecki.

The victory was Rusiecki’s third win in three states in three consecutive weeks. He previously won the Naked Prussian 50-Miler on April 1 in Pennsylvania and the Runamuck 50K on April 8 in Vermont.

Rusiecki was joined in the top 10 by 41-year-old Tom Dmukauskas of Somerville, Mass., who placed eighth overall in 5:56:18.

Hannah Lippe was the top female finisher from Massachusetts. The 28-year-old Cambridge resident was the third-place female and 32nd overall in 6:49:37. Women’s champion Stacey Clark, 35, of East Berlin, Conn., finished 12th overall in 6:03:54.

Living in New England didn’t stop Rob Rives from directing a race in California this year. A resident of Boston, Mass., Rives is one of the founders of Humanity Running, an organization that uses endurance running to raise awareness and funds for a variety of causes. Funds have been raised through individual endurance feats, such as Rives’ Fastest Known Time (FKT) of the 165-mile Cohos Trail in 2015, as well as through the Merced Canyon 44K trail ultramarathon that Humanity Running launched in 2016.

Proceeds from the 2017 event went to Adventure Risk Challenge, a non-profit educational organization that works with youth through integrated literary and wilderness experiences. Rives’ continued involvement as a race director gave the race a Massachusetts connection, and so did one of the runners.

Boston resident Will Holets made the cross-country trip to race in California’s shortest trail ultra on Saturday, April 15, in the Merced River Canyon near Yosemite National Park. Twenty runners took part in the ultra, and another 28 ran the 14K race. Holets, 28, finished 10th overall and was the fifth-place male finisher in 5:26:19. Jasper Peach, 31, of El Portal, Calif., was the race champion in 3:35:47.