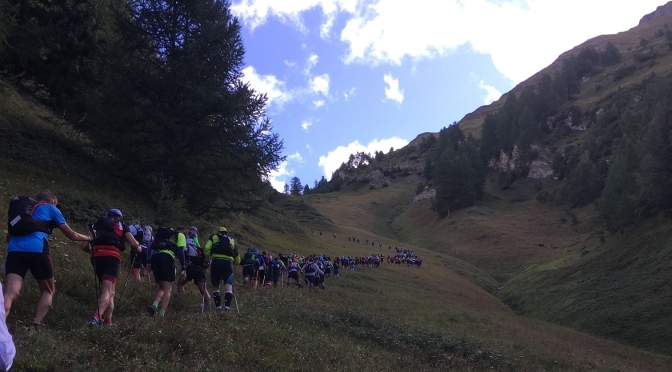 Global ultrarunning’s marquee event, the Ultra-Trail du Mont-Blanc festival, took place Aug. 21-28 in Chamonix, France, and in neighboring communities across the border in Italy and Switzerland. Thousands of runners once again convened in the Alps for a week of racing in the mountains, capped by the event’s namesake 171.5-kilometer UTMB. Many of the world’s elite runners took part, as did thousands of up-and-comers and everyday runners eager for the challenge.

Katie Schide honed her mountain skills in New England. At the 2022 UTMB, she proved she belongs among the best mountain ultrarunners in the world.

Schide, a native of Gardiner, Maine, and graduate of Vermont’s Middlebury College, now lives in France where she trains year-round in the Alps. In college, she worked in the AMC huts in New Hampshire’s White Mountains where she logged many long mileage days on the rugged mountain trails. Though she didn’t begin racing ultras until 2015 while in graduate school at the University of Utah, she still made her mark on New England trails when she set the fastest known time on the White Mountains Hut Traverse in 2019.

Schide began honing her racing skills in the Alps, first with a top-10 finish at the 2017 Festival des Templiers 73K and a victory at the 2018 La Maxi Race du Lac d’Annecy 83K, both in France. She followed those efforts by making an explosive debut at the UTMB festival, finishing as the runner-up in the 2018 CCC 100K. She returned in 2019 and made her debut in the 171.5K (106.5 miles) UTMB, navigating the course and its nearly 33,000 feet of climbing on her way to placing sixth among the women’s field in 27:22:56. Two years later, she returned and posted another top-10 finish, this time as the eighth-place woman in 27:39:45.

In 2022, Schide delivered the biggest performance of her career as she raced to victory at the UTMB. She amassed a large early lead only to lose it when stomach issues crept up. Still, she persevered, rallied hard to reclaim the lead and went on to finish as the first-place woman in 23:15:12. She placed 22nd overall. Canada’s Marianne Hogan was the second-place female in 24:31:22, followed by American Kaytlyn Gerbin in 25:07:24.

Since breaking onto the ultrarunning scene in 2016, Britta Clark has been a force to be reckoned with. The resident of Goshen, Vt., has amassed several ultra victories, including wins on the east and west coasts, from multiple wins at the Catamount 50K and Moosalamoo 36-miler, to the Killington 50K, Vermont 50-miler, and a record-setting run at the Castle Peak 100K in California.

Clark made her European racing debut at the UTMB festival, racing the CCC. The 100K journey began in Courmayeur, Italy, passed through Champex-Lac, Switzerland, and then onward to the finish line in Chamonix, France, amassing 6,100 meters (20,013 feet) of climbing along the way.

More than 2,100 runners toed the starting line in Courmayeur prepared to take on the challenging course awaiting them. The course is known for its five major climbs with the 4,300-foot ascent of Tete de la Tronche and the 2,400-foot climb to the Grand Col Ferret packed into the first 30K.

Clark passed around 80 runners during those early climbs, arrived at Champex-Lac (54.1K) in 244th place overall, and then went to work picking off dozens more runners the rest of the way. She moved up as far as 183rd overall by the time she departed Vallorcine (81K) before losing a bit of ground during the final miles. Ultimately, Clark crossed the finish line just before midnight in 14:58:04, in 203rd place overall, 35th place among the women’s field and as the ninth American female finisher.

Less than an hour after Clark finished, former Hudson, Mass., resident and current Colorado resident Liz Canty finished 270th overall and 43rd among the women in 15:41:34.

Joseph Boyle of Nashua, N.H., joined Clark among the finishers. Boyle placed 1,032nd overall in 21:55:58. Stephen Reed of Concord, N.H., took part in the race but withdrew at the Champex-Lac aid station after 54.1K of running and more than 12 ½ hour on the course.

Strength in numbers worked to Jessica Marion’s advantage in the TDS.

The 147.4K race with 9,738 meters of climbing is among the toughest events at the UTMB festival, but it wasn’t too tough for Marion. The Brunswick, Maine, resident was among the 1,774 starters of the race, which is short for “Sur les Traces des Ducs de Savoie” (following the footprints of the Dukes of Savoie). That group started in Courmayeur, Italy, journeyed through the Pas d’Outray and several of the Tour do Mont-Blanc villages before making their way to Chamonix.

Ultimately, 1,072 runners finished the race. Marion was among them, and she had a secret weapon: her sister. Joined by her sister Stacey, who lives in Washington State, the Marion sisters battled the course together. Ultimately, they also finished just one second apart but both in the women’s top 10. Stacey Marion placed ninth among the women and 52nd overall in 27:11:41 and Jessica Marion was the 10th-place female and 53rd overall finisher in 27:11:42.

In addition to Marion, a trio of New England men finished the TDS, and though they ran their own races they finished together. Jack Bailey of Medway, Mass., Tim Finocchio of Holbrook, Mass., and Andrew Gilbert of Hardwick, Vt., spent much of the race within minutes of each other. Occasionally they were separated by a few hours due in part to rest breaks, but ultimately they’d pull close again. By the time they reached the home stretch in Chamonix they were within a few strides of each other. Bailey and Finocchio finished together in a tie for 826th overall in 40:37:45. Gilbert finished one second later in 40:37:45 for 828th place.

Two more New England residents started the race but did not finish. Claire Gadrow of South Kingstown, R.I., timed out after 93.6K of running and 27 ½ hours on the course. Matt Swoveland of Boston, Mass., withdrew from the race after 55.5K and nearly 14 hours on the trail.

Journeying from Orsières, Switzerland, to Chamonix, France, the OCC is the shortest of the UTMB festival’s ultramarathon distances at 55.9K with 3,485 meters of climbing. Four New England residents were among the starting field, and three of them were among the 1,333 finishers within 15 ½ hours. Hillary Wheeler of Norwich, Vt., was the top New Englander with a 657th-place finish in 10:49:14. Kari Gleiser of Hanover, N.H., placed 823rd in 11:38:59 and Taynay Oliveira of Rego Park, Conn., was 939th in 12:15:02.  William Ozanne of Darien, Conn., started the race but withdrew after 33.2K and nearly seven hours on the course.

Manuel Merillas of Spain was the overall winner of the OCC in 5:18:29. Sheila Aviles Castano of Spain finished 30th overall and first among the women’s field in 6:10:16.

No New Englanders in PTL

No New England residents took part in this year’s PTL – Petite Trotte à Léon – the 300-kilometer, multi-day, team-based race with 25,000 meters of climbing. Teams of two or three runners had 152 ½ hours to complete the race through the mountains in France, Italy and Switzerland.

Vermont’s Tower-Pierce Finishes MCC
The longest of the UTMB festival’s sub-ultra distances is the Martigny-Combe à Chamonix, or MCC. This year’s race challenged runners with 2,469 meters of climbing over the course of 41.2K in distance – just shy of a marathon. One New England resident – Julie Tower-Pierce of East Burke, Vt. – toed the starting line alongside 971 other runners in Martigny. Of that group, she was one of 909 who ultimately reached the finish line in Chamonix. Tower-Pierce placed 845th overall in 9:44:05.

Ludvik Fernandes of France was the overall winner in 3:54:00. Candice Fertin of France finished 10th overall and was the women’s champion in 4:24:22.

Two New England residents were among the field for the inaugural running of the UTMB festival’s newest event, the Experience Trail Courmayeur, or ETC. The ETC is a 15K race that starts and finishes in Courmayeur with 1,462 meters of elevation gain.

Most of the 764 finishers completed the race in less than six hours. That included both Marcelo Gleiser of Hanover, N.H., and John Gadrow of South Kingstown, R.I., who finished minutes apart. Gleiser placed 330th overall in 3:03:32 while Gadrow followed three minutes later in 3:06:57, good for 349th place.

This year’s YCC (Youth Chamonix Courmayeur) featured a two-day event for young runners born between the years 2000 and 2008, starting with a 7.5-kilometer race with 713 meters of vertical gain in Courmayeur followed the next day by a 3.1-kilometer race with 138 meters of gain in Chamonix. The lone New England competitor, Lucian Gleiser of Hanover, N.H., had strong performances both days. He placed 20th overall in the first race in 46:55. The next day in the short event known as “The Revenge,” Gleiser finished third overall in 18:08.