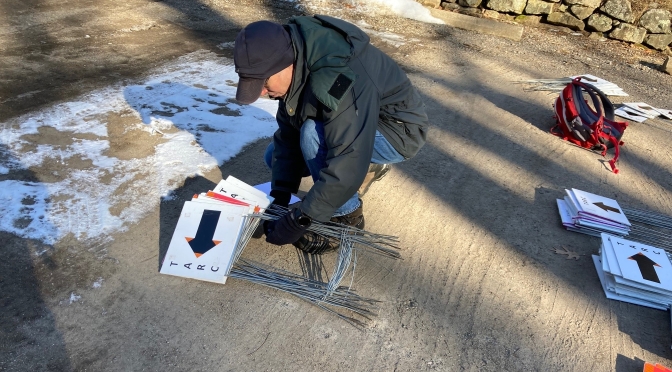 The Trail Animals Running Club has postponed the TARCtic Frozen Yeti 30-Hour Ultra and 15-mile night trail race by one week, the race directors announced in an email to runners at 6:11 p.m. today.

Meteorologists have spent the past few days predicting that a dangerous nor’easter may engulf much of eastern New England, including the greater Boston area, beginning Friday night and continuing throughout Saturday, bringing upwards of 12-18 inches of snow and strong winds to the area.

“While it’s still possible that the meteorologists are wrong, that the storm will blow out to sea, and that we’ll be laughing at ourselves in a few days, our main responsibility is everyone’s safety, so we are postponing the TARCtic Frozen Yeti,” race directors Surjeet Paintal, Carolyn Shreck, and Josh Katzman wrote in an email to runners. “The new race date is next weekend (2/5 & 2/6). Both start times and all other race details remain the same.”

The Frozen Yeti was scheduled to begin at 8 a.m. Saturday at Hale Reservation in Westwood, which is about 13 miles southwest of downtown Boston, meaning runners would have been on the course when conditions might be at their worst. This year’s event has no indoor access due to the ongoing COVID-19 pandemic, meaning runners and volunteers alike would be constantly exposed to whatever the storm brings. Access to the site for emergency vehicles during a major storm presented another concern.

The decision to postpone wasn’t made lightly. The week began with snow in the forecast for Saturday, though the amount appeared minimal. As the days passed, however, the projected storm grew far larger in size and strength. Still, final race preparation continued in earnest.

For 3 1/2 hours on Wednesday afternoon, Chris Martin and another volunteer walked the first five miles of the TARCtic Frozen Yeti course at Hale Reservation, one carrying a stack of signs and the other a cordless power drill.

Every few minutes they’d pause and try to place a sign marking a turn or tricky area. The attempt to push it into the ground inevitably failed at least 90 percent of the time. It was just 20 degrees after all, with a feels-like temperature of 9 degrees Fahrenheit thanks to the light breeze that drifted through the forest. The ground was frozen solid. Following each failed effort, a gentle whir filled the air as Martin drilled through the frozen soil and layers of ice, making 6-inch deep holes to house the wired legs of the signs.

They finished by the glow of headlamps, walking carefully over icy patches on what were otherwise mostly clear trails as a handful of snowflakes drifted around them in the darkness. As they strolled across Grossman Beach next to Powissett Pond, Martin received a text message from Katzman offering a heads-up that the authorities at Hale Reservation were growing nervous about the forecast for a nasty nor’easter.

The race directors shared that news with runners in an email Wednesday evening.

“With the forecast still somewhat in flux, we plan to make a final go/no-go call with Hale on the race tomorrow and will send out an update tomorrow night,” they wrote.

Martin was back at Hale 12 hours later for what would be a full day marking the remaining two 5-mile loops of the course with the support of additional volunteers. They endured temperatures in the teens and low 20s for most of the day, preparing the course and hoping the effort would be worth it.

The effort still might pay off, but they’ll know more in a week. The RDs spoke with staff at Hale Reservation on Thursday and collectively agreed to postpone the race. Shortly after 6 p.m. Thursday night, the announcement was made.

The 30-hour race will now begin at 8 a.m. Saturday, Feb. 5. The 15-mile night race will begin at 8 p.m. Entrants’ registrations will be automatically rolled over to the new date, so no action is required.