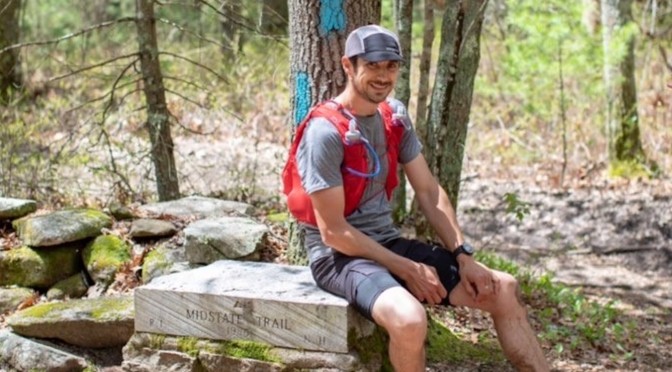 Cody Cutler may be a relatively new guy on the ultrarunning scene, having run his first ultras just last year, but he has quickly established himself as a force to be reckoned with.

Cutler logged a runner-up performance in his ultra debut at the Cape Cod Trail Race 50K in April 2019, followed by a fourth-place finish in The North Face Endurance Challenge 50-miler at Wachusett Mountain in June. His resume continued to grow in March 2020 when he earned his first ultramarathon victory at the Merck Forest Snowshoe Ultra 50K and set a course record along the way.

Accomplished on the ultra racing scene, Cutler has now made his presence felt in the world of Fastest Known Times (FKTs) thanks to a monster effort May 15-16 on the Midstate Trail, a 92-mile north-to-south crossing of Massachusetts that consists of around 60 miles of protected land, 15 miles of private land, and 17 miles of public roadways.

Many runners worldwide have sought out FKT pursuits while races have been canceled or postponed due to the COVID-19 pandemic; Cutler wasn’t one of them. The 35-year-old from Sterling, Mass., stumbled upon the FKT scene by accident after two races he was signed up for — the Chesterfield Gorge Ultra and the Vermont 100 — were postponed or canceled.

“I was looking forward to both of those races, and that’s kind of where the whole Midstate idea came up,” Cutler admitted. “My next race is technically the Midstate Massive 100 (in October), so I just said ‘to hell with it, I’m going to start exploring the Midstate a bit more.’ I spent the better part of last month doing 35-40 miles on the Midstate on the weekends just getting a feel for it. Then, while looking for information about the trail online, I stumbled across the FKT stuff. I saw Amy Rusiecki’s name was up there (women’s supported FKT on the Midstate Trail, 23:57:28) and thought that was really cool, so I hatched a plan to go for it.”

Cutler opted to make his FKT attempt in the unsupported style, with no crew and no gear drops along the way. The previous men’s unsupported mark of 1 day, 20 hours and 8 minutes was set by Eli Burakian of Brownsville, Vt., in May 2019 when he hiked the trail carrying a heavy pack in preparation for a thru-hike of the Long Trail. In his recap of the effort, Burakian — an accomplished ultrarunner — predicted that his mark would soon fall, noting “This could be done much faster, as in probably under 30 hours.”

Nearly a year to the date after he made that prediction, Burakian would be proven prophetic.

Cutler spent a few weeks getting to know the trail, studying the sections he would run at night, and memorizing turns. He fine-tuned his gear, including a 12-liter Salomon pack, Patagonia jacket, and two Salomon 500-milliliter soft flasks with built-in water filters so he could refill from natural water sources along the way. He dialed in his nutrition, deciding on a stockpile of Spring Energy Gels made with real food.

In the afternoon on Friday, May 15, Cutler headed to the New Hampshire border, just north of Mt. Watatic, and began his journey south.

The heat and the climb up Mt. Watatic tested him early, and the challenge only grew as he reached Ashburnham and discovered loggers had cut down numerous trees, some of which contained trail markers. As he made his way toward Wachusett Mountain in Princeton, the heat turned to chill as strong winds blasted Cutler and a heavy rain began to pour.

“Going up Wachusett Mountain, it was raining so hard I could barely see four feet in front of me and the trails were just rivers,” Cutler recalled. “The rain slowed by the time I got to the top and I found an alcove on the tower up there so I was able to dry my hands off and text my wife to let her know I was fine. I checked the radar and saw another band was about to come through so I figured I’d better get off the mountain fast. Fortunately that was the worst of it.”

It continued to rain on and off until Cutler reached Spencer, around two-thirds of the way to the finish. As he pushed through the night, Cutler stayed focused on the task at hand and counted down the hours until morning.

“I had a pretty good idea about where I would see the sunrise,” he said. “I was coming up over Moose Hill in Spencer. Anybody who’s been there knows it’s pretty scenic, but the sun was just starting to come up over the horizon. I knew it was daytime, I was feeling good, and it really just turned the corner for me.”

Cutler began his journey with the goal of finishing in 26-28 hours, but as he neared Whittier Farms less than 15 miles from the finish he sensed a major opportunity.

“As I got to Whittier Farms I realized I had a pretty good shot at sub-22 hours, so I decided to lay it all out there,” Cutler said. “Mile 83 was my fastest mile — I ran a 9:13 — and by the time I got to Douglas States Forest I was pretty spent. I kept asking people how long it was to the state line, so I did a pretty good amount of walking at the end.”

At 12:12 p.m. on Saturday, May 16, Cutler reached the Rhode Island state line in Douglas State Forest, completing his journey across Massachusetts in 21 hours, 40 minutes and 34 seconds. A day later, following submission of his GPS data and photos taken along the way, his performance was certified by fastestknowntime.com as the unsupported and overall record on the trail.

His favorite memory of all, he said, was celebrating the moment with his wife and daughters.

“They took the time to drive down and see me at the finish,” he said. “That was huge for me. That made me feel really good. I was sitting on a rock at the state line in Rhode Island and my wife and daughters came up about 10 minutes after I finished. When this all began I blew their minds when I told them what I was going to do, so my daughters came running up to me saying ‘Daddy, daddy, you did it!’ I think that was the best part.”

Record in hand — at least for the moment — Cutler said he doesn’t have his eye on any other FKTs right now. Family time, a busy summer with his painting business, and refocusing for the Midstate Massive 100 await. In the meantime, he said he’s eager to see other runners try to improve upon his time as a red-hot FKT scene continues into the warmer months.

“I would hope so,” Cutler said when asked if he expects someone to challenge his record soon. “I definitely think somebody can do it supported in under 20 hours. That being said, I’d love to see somebody beat my unsupported time. Competition is a good thing, you know; it keeps everyone pushing themselves.”