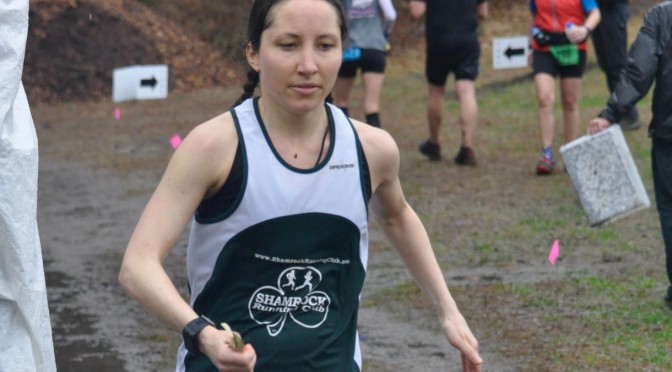 WESTON, Mass. – Of course it rained. It was always going to happen. This is the Spring Classic, after all.

The Trail Animals Running Club’s Spring Classic has established its share of traditions through the years – the yeti howl at the start; the wooden “trophies” foraged from the course; the MarketBasket sushi tray for volunteers – but perhaps the most predictable feature of the early-season event is rain. Nearly every Spring Classic has experienced at least a bit of the wet stuff, usually during pre-race set-up or at some point in the first loop or two of the race.

What set the ninth annual event apart on Saturday, April 20, was the magnitude of rain. The Spring Classic typically receives a light sprinkle, just enough to ignite the humidity in the forest before the afternoon sun comes out. This year, however, the Spring Classic was both steamy and a soaker. A light but steady rain fell as volunteers set up the check-in and aid station tents; it sprinkled during the pre-race briefing and a sauna-like first loop of the five-loop 50K race; then it poured, soaking any remaining dry spots on runners already dripping with sweat and creating a large pool at the finish line that threatened to drown the timing mats.

The Spring Classic is designed to be a fast course with a few rolling hills and a mixture of singletrack dirt, a little gravel and some sections on fire road. With the rain making some spots slick and the humidity putting strain on runners’ lungs, it made for a challenging combination.

Both Brian Burke and Amy Damon embraced the adversity and thrived in it.

For Burke, who has been running trails for the past year and earned a 100-mile belt buckle in February at the snowy, icy, frigid TARCtic Frozen Yeti, the Spring Classic was a welcome change.

“Even from Hale to this one, it’s completely different conditions; this was humidity, and it was tough,” Burke said. “You’re soaking wet before it even really started raining, and you kind of know that’s the way it’s going to be. I’ll take this over how it’s going to be in July, though.”

Burke followed his 100-mile performance with a first-place finish at TARC’s To Hale and Back 6-Hour Ultra in March, so the 37-year-old resident of Somerville, Mass., was optimistic entering the Spring Classic that he could have a good day. He also was humbled to share the course for the first time with Brian Rusiecki, 40, of South Deerfield, Mass., one of the most accomplished men’s ultrarunners in the region. Rusiecki earned a top-five finish the week prior at Breakneck Point in New York, so the Spring Classic was part of his annual routine of racing himself into race shape for bigger summer ultras.

“I knew Brian Rusiecki’s out there and I was going to be happy just to hang with him for a lap and see how he was feeling,” Burke said. “I’m new to this. I’ve been running for a year doing races; I know his reputation and I caught him right before we raced and introduced myself. That stuff to me is huge. Guys like him have so much experience. When you’re going into these races you’re learning almost everything the hard way, so to be able to talk to a guy like that for a bit and for him to be so open the way trail-runners tend to be, that was really special to me.”

Burke and Rusiecki ran the first three-plus loops almost stride for stride, rolling into the aid station together after each loop and then reconnecting within minutes of starting the next loop. They ran together until Rusiecki began having trouble breathing and started cramping. He ultimately withdrew from the race and had a noticeable limp on his right side, something he attributed to the cramps.

While Burke has experienced a variety of conditions during his first year of TARC races, Damon was making her TARC debut. The 32-year-old resident of Lynn, Mass., found the conditions to her liking.

“I love the heat; I hate training in the winter,” Damon said. “This last week or so since it’s warmed up has been great. The warmth has been really rejuvenating for me. I think I do better than most people in the heat — don’t get me wrong, if it’s 80 degrees it’s uncomfortable, but I can still run my same pace as I would (if it was cooler).”

Indeed, the humidity didn’t seem to faze Damon, nor did the rain. A sub-3-hour road marathoner who runs with the Mystic Runners and the Shamrocks – the latter whose jersey she sported during the race, Damon proved that her pacing discipline could translate nicely to the trails.

“I ran a PR last fall in the marathon, so I wanted to do something that was just about going out there, setting a good pace and maintaining it,” she said. “I didn’t have much more expectation besides finishing it.”

Damon ran the first 10K loop in 53 minutes, and then completed her next two loops in 54 minutes apiece.

“I aimed to run a steady pace for the first three loops and see how it felt,” she said.

Never too far behind Damon were Kristin Ritchie and Laura Ricci. Both were less than a minute back after the first 10K, two minutes back after 20K, and within about five minutes after 30K. Ultimately it became a race for second place, however, and a strong push during the fourth loop allowed Ritchie, 27, of Northampton, Mass., to build a safe cushion on Ricci, 35, of Boston, Mass. Ritchie secured runner-up honors in 4:44:37, capping an impressive first ultramarathon. Ricci finished third in 4:58:47, collecting her second Spring Classic 50K podium finish (second in 2017).

Dylan Foley, 25, of New London, Conn., became an ultramarathoner at the Spring Classic as she finished fourth in the women’s race in 5:11:04. Ultramarathon veterans Jessica Goldman, 46, of Dover, N.H., and Kristen Smith, 33, of Danvers, Mass., ran the entire race together and finished fifth and sixth, respectively, in 5:17:50 and 5:17:51.

Ninety runners finished the 50K within the eight-hour time limit.

Michael King has been a model of consistency at the Spring Classic marathon, tackling the course three times (2015, 2017, 2019) and winning the race all three times. His most recent victory and second-fastest effort came Saturday when the 29-year-old from Augusta, Maine, dominated the men’s field, winning in 3:33:29. It was six minutes slower than his time from 2017 (3:27:38), but good for the third-fastest in course history. Only Patrick Caron has gone faster, winning the 2018 race in 3:08:13. While King ran away from the field, the race for second-place male went down to the wire between Matthew Berk, 34, of Melrose, Mass., and Owen O’Connor, 33, of Kingston, N.Y. Berk edged O’Connor by seven seconds, finishing in 4:05:26 to O’Connor’s 4:05:33.

Simon, Matthias Victorious in Half Marathon

The half marathon had the largest field of any distance at the Spring Classic with 109 finishers and several additional starters. Runners in that distance completed a brief out-and-back at the start before circling the 10K loop twice. The course records were safe on this day, but Garrett Simon, 22, of Cambridge, Mass., did his best to go after the men’s mark. He didn’t quite reach Myles Courtney’s course standard of 1:29:41, but Simon did put up the seventh-best time in course history with his winning time of 1:32:46. He outdistanced the field by nearly three minutes. Steve Levandosky, 48, of Hopkinton, Mass. – the 2017 Spring Classic 50K champion – was the men’s runner-up in the half marathon in 1:35:32. Fresh off of a runner-up finish at last week’s Don’t Run Boston 50K, Kyle Bergemann, 27, of Boston, Mass., finished third in 1:37:49.

Sixty-one runners raced the loop course one time for a 10K. They ran in a light drizzle and sauna-like conditions before the heavier rain began. Brendon Campbell, 34, and Alexandra Brinkert, 32, both of Medford, Mass., brought home victories in the men’s and women’s fields, Campbell in 43:13 and Brinkert in 53:56.