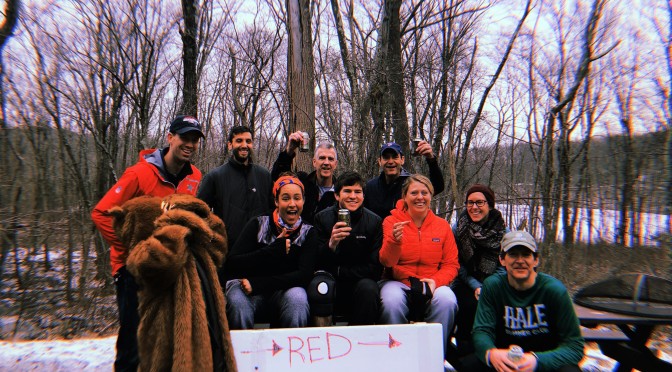 WESTWOOD, Mass. – Shannon Obey can’t help but chuckle as she reflects on the early days of Hale Reservation’s relationship with the Trail Animals Running Club.

The Trail Animals had played host to their inaugural TARC 100 in June 2013. That year’s race took place in Weston, and it has lovingly gone down in TARC history as “the Mud-Fest.” The course took runners through a floodplain, and true to the word, the course flooded. Those who finished endured four 25-mile loops of post-holing in the mud and tromping through knee-deep water in some places.

Worried they’d wear out their welcome in Weston, the Trail Animals went looking for a new home for the race.

“Google Maps showed a big green space at Hale,” recalled Josh Katzman, who was the Race Director for the TARC 100. “With (Hale) being a private organization, I knew permitting might not be as complicated, so we reached out.”

Katzman spoke with Obey, the Director of Family Programming and Events at Hale Reservation.

“At the time he said ‘we’d like to run 100 miles here,’ and I was like ‘what…’” Obey said. “It was such an unfamiliar thing for us. We’d never had a group want to do that. We’d done our own 5Ks here and hosted a triathlon for several years, but our numbers were dwindling for those. It seemed like a cool opportunity to have a group come out and get on our trails.

“Josh said he’d mark all the trails, do all the work; he just needed to be able to go through the different program areas. That’s where it all started.”

Those early conversations marked the beginning of what has become a warm relationship between both organizations.

Ultimately, the TARC 100 moved to Hale starting in 2014, and it stayed there through its final running in 2016. For Obey and her fellow staff at Hale, the inaugural event was eye-opening.

“The first year was really funny to watch,” Obey recalled with a laugh. “They were at Powissett (Lodge). I run our Hale summer club over on the other side of the reservation, and throughout the day we kept seeing these exhausted runners coming through. That was so unfamiliar to me at the time; ultras were not on my radar.”

Obey was intrigued, as were several of the Hale staff. They got to know the Trail Animals better in the years that followed; friendships and mutual respect between the organizations blossomed. The Trail Animals added a second event at Hale, the Spring Thaw (now To Hale and Back), as well as the annual TARC Trail Camp, a trail-running summer camp. Hale provided the running club with space to store its race equipment on-site. The Trail Animals have done trail maintenance at the reservation and always leave the trails spotless post-race.

“The (TARC) community is so great and so respectful of nature,” Obey said.

In 2017, Katzman teamed up with Hale Reservation Executive Director Eric Arnold to begin creating Intrepid Academy at Hale, a semester-school program for students in the Boston Public Schools that combines education, exercise and nature to create a transformative learning experience. The program launched in 2018, with Dylan Gschwind coming on staff as the Lead Outdoor Guide for Intrepid Academy.

Last fall, when the Trail Animals asked permission to hold a new winter race at Hale, the TARCtic Frozen Yeti 30-Hour Ultra, Obey had an idea.

“When they said they wanted to do it in February, I thought that was crazy, and I said we should do a relay team,” she said. “Two of my co-workers are runners, and they said ‘Ok! We’re going to do it!’”

Gschwind pitched the idea to Katzman, and he enthusiastically welcomed it. Race Directors Surjeet Paintal and Carolyn Shreck did, too.

The relay team consisted of eight Hale staff members. Their plan was to tackle the 15-mile clover-leaf loop course in 5-mile increments since it was broken into three smaller, approximately 5-mile loops labeled Red, White and Blue. Each 5-mile mini-loop started and ended at Powissett Lodge, which was the race’s lone aid station. The Hale Team set up its headquarters just down the park road at the Trading Post where runners could sleep or stretch out.

“Our goal as a team was to try to get to 150 miles as a team, and our goal minimum for each team member was 15 miles spread out over those 30 hours,” Obey said. “Our other goal was to always have someone on the trails throughout the 30 hours, to never have a break during transition time, and to always have most of our team there in between runs.”

That plan came to fruition on Feb. 2-3 when the team braved below-freezing temperatures and ice-packed trails. The conditions were challenging for new and experienced trail-runners alike. The Hale Team welcomed the challenge and embraced each other.

“We always had a team mentality. We were cooking together; we set up air mattresses so we could all sleep there. It was just a really fun community. Even when we would drive up from Trading Post to the lodge we’d have all of our teammates up there.”

Beyond the weather and trail conditions, they encountered other new challenges.

“My co-worker Sydney (Howland) and I were talking about running in the dark,” Obey said. “Neither of us had done that before. It was really cool to push our limits in ways we never knew we had. All of us surpassed our expectations.”

While the Hale Team found strength in working together, they also made an impression on the Trail Animals.

“It says a lot when someone wants to spend 30 hours of their personal time back at their workplace, “Shreck said. “Hale Team’s energy and excitement was contagious.”

“I think the best thing about watching the Hale staff participate in the Frozen Yeti was watching them experience something new to them on their own grounds,” Paintal added. “There was an excitement and eagerness among them.”

For Katzman, who has played such a large role in fostering the relationship between TARC and Hale Reservation, watching his friends and collaborators tackle a trail race and embrace the challenges and camaraderie the sport offers was fulfilling.

“At the end of the race, I saw the handoff between Eric and Dylan at Powissett Lodge, and just seeing how much fun they were having was contagious,” he said. “The last two times I ran the White Loop, I saw Team Hale at the Trading Post and it lifted me even higher than I already felt. I was psyched to see these people, who put so much time into making Hale the incredible place it is, get to enjoy it and having so much fun doing it.”

Ultimately, the Hale Team completed 140 miles, with each runner covering between 10 and 25 miles apiece. They’d admired the trail- and ultrarunning community from arm’s length for the past few years; now they were full-fledged Trail Animals themselves.

“It was just a really awesome feeling to be there with all these people who are really passionate about running, being outdoors, respecting nature and being immersed in nature,” Obey said. “It was just a really cool experience which I don’t think other places get to have.”

For many on the relay team there were plenty of sore muscles as they returned to work on Monday after the race. Those aches and pains came through hard work and tough running; they invoked a feeling of pride and stirred feelings of motivation. A few of the Hale staff organized a Tuesday trail run to shake out the legs.

They also started making plans for their next race.

“We’re signing up for the March race!” Obey said, the excitement evident in her voice as she referenced the To Hale and Back 6-Hour Ultra. “A few of us are going to try to do the full six hours. It definitely sparked a passion within all of us.”