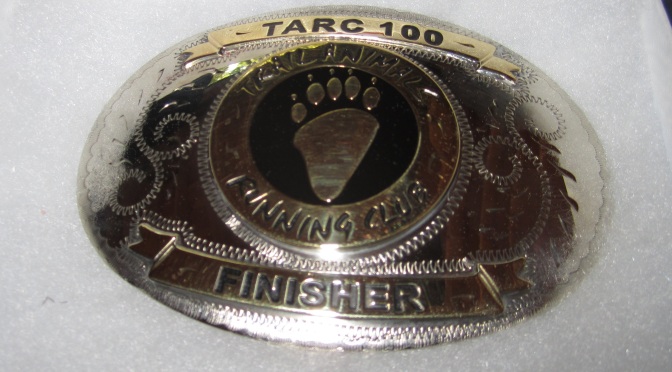 The TARC 100 has experienced plenty of evolution during its four years of existence, from venue changes, to season changes, to weather changes, to additional distances offered and number of participants involved.

Through it all, two things have remained constant: As Massachusetts’ only 100-mile race, that distance has been offered; and runners have been treated to a hearty dose of hospitality that the Trail Animals take pride in providing.

“It’s sort of a bittersweet kind of thing,” said Josh Katzman, race director. “On one hand, I know I’ll have a ton of free time and won’t have to jump right into prepping for next year a few weeks after this year’s race is done. But on the other hand, this is something we’ve created in this community and the idea that it won’t be around is tough.

“We definitely want to make sure everyone involved either running or as a volunteer feels like ‘I’m doing something special.’ I want them to walk away with that sense.”

Race entries surged during the final week before registration closed Tuesday night. A total of 69 runners are entered in the 100-miler, 29 in the 100K, 12 in the 50-miler, and 29 in the marathon. The four distances are the most offered in the event’s history, and Katzman promised that all of the runners will be well taken care of.

“I would hope that every runner in any of the races basically feels like they’re the ultrarunner of the year when they come through any of the aid stations,” he said. “With it being a smaller race, one of the things we can do is really make that effort to familiarize ourselves with all of the runners, know their names, and really make an effort to make them feel like they’re the Rob Krars and Jim Walmsleys of the world. That’s what makes TARC special – we try to celebrate everybody. There’s something special about going through an aid station and feeling like everyone’s there for you as an individual. If someone can feel that, that makes a difference.”

As of Thursday morning, weather conditions look promising with a 20-percent chance of showers, cloudy skies, and a high of 70 degrees and low of 53 for Saturday according to weather.com. Sunday is expected to reach the mid-60s.

If the forecast holds, then trail conditions should be ideal. That bodes well for runners and spectators alike, because – on paper, at least – the 100-mile race has arguably its most balanced field ever.

“I definitely think this is our deepest and most closely-matched field,” Katzman said. “If everyone shows up and is healthy, then it should be a lot of fun to watch the front of the race.”

Notable 100-mile entrants on the men’s side include Will Swenson of Andover, Mass., who in February finished fourth overall at the Rocky Raccoon 100 in Texas; Dan Barger of Auburn, Calif., who is a former Massanutten 100 champion; Rob Rives of Ashland, N.H., who in May was the runner-up at the Thunder Rock 100 in Tennessee; Joe Loureiro of Andover, Mass., who finished third at the Manchester 2 Monadnock 55-miler in May and earned a top-20 finish at the Vermont 100 in July; Dima Feinhaus of Waban, Mass., whose extensive list of endurance feats includes a second-place overall finish at the 2015 24-Hour Around the Lake with 108.717 miles, a seventh-place finish at the 2014 Wapack and Back 50-miler, and strong finishes this year at the Cruel Jewel 100-miler in Georgia and the highly competitive Sean O’Brien 100K in California; and Tom Dmukauskas of Somerville, Mass., who has six top-10 overall finishes in ultras to his credit this year including runner-up finishes at the Manchester 2 Monadnock 55-miler in New Hampshire and the Moosalamoo 36-miler in Vermont.

On the women’s side, Kristen Smith of Salem, Mass., was the women’s champion at the Mother’s Day 6-Hour race in Topsfield and the fifth-place female at the Pineland Farms 50-miler in Maine this year; Jennifer Kenty of Medford, Mass., notched a fifth-place female finish at the TARC Summer Classic 40-miler; Jennifer Carvallo of Pompano Beach, Fla., was the female champion and second overall at the Merrill’s Mile 24-hour race – logging 101.516 miles – in July; Johanna Ylanen of Tolland, Conn., who was the third-place female at the Superior 100-miler in 2014 in Minnesota and 14th-place female at the Run Rabbit Run 100 in Colorado in 2015; and Laurel Valley of Porter, Maine, whose 100-mile credits include Western States, Arkansas Traveler, Massanutten, and three finishes at Vermont.

In the 100K, defending champion Jesse Veinotte of Worcester, Mass., is back to defend his title. Additionally, Marek Telus of Hopkinton, N.H., looks to build upon his third-place finish in the 50K at the Vermont 50 last month; and Brad Overturf of Cromwell, Conn., looks to add to his string of top-10 finishes at New England ultras in recent years. On the women’s side, Liz Canty of Madison, Ala., has three first-place finishes at Alabama 50Ks this year along with three runner-up finishes in ultras; Alexandra Brinkert of Medford, Mass., was the overall winner of the Not the Worst Weekend 8-Hour in April with 42.2 miles, and was the 15th-place female at the Vermont 100 in July; and Colleen Smith of Nashua, N.H., will take on her longest race since finishing the Ghost Train 100 in 2014.

With just 12 entrants, the 50-mile race has the weekend’s smallest field, but it is packed with speed. Most notably, Brian Rusiecki of South Deerfield, Mass., is in the field and he looks to build upon what already has been a dynamite 2016 racing season with victories at the Vermont 100-miler, the Vermont 50-miler, the Bull Run Run 50-miler and Massanutten 100-miler in Virginia, and runner-up finishes at the North Face Bear Mountain 50-miler and Manitou Revenge 54-miler in New York. Additionally, Brad Dewees of Somerville, Mass., looks to be in the hunt after posting prior podium finishes at races in North Carolina and South Carolina; and Phoebe Matthews of Cambridge, Mass., looks to be the favorite on the women’s side after posting a first-place finish in the 50K at the Hampshire 100 in August. She also was the women’s champion in the 50K at the 2015 Vermont 50.

No matter a runner’s pace, however, all of them will encounter a course that Katzman described as being sneakily difficult. Each 25-mile loop only has around 2,500 feet of cumulative vertical gain, but the course has so many twists and turns that Katzman cautioned runners to come prepared for it to be slow at times.

“The biggest thing that people are caught off-guard by, aside from the parts where it’s sort of doubletrack and you can get in more of a flow where the miles tick away, is that it’s a lot of singletrack with a lot of turns. People might think they’re going to click the miles away, but you hit these patches of singletrack that are tight and twisty, they’re beautiful to run, but the miles are just slow because you aren’t running in a straight line.

“I think the sinewy nature of the singletrack surprises a lot of people, and it’s one of the things that makes this course sneaky-hard. You’re in the woods a lot, too, so it’s very easy to feel like ‘Haven’t I been here before?’ You’ve just got to be prepared to accept that you’re going to be running 2-3 minutes per mile slower and be OK with that.”

Katzman also encouraged runners to avoid the urge to drop from the race at the end of a loop, which can be tempting when a warm car, clean clothes, and hot food are close by. He wants to see every runner succeed, so his best advice is to avoid lingering too long at the main aid station and get back on the trail.

“If you can just force yourself that you’re not going to drop at the start/finish, once most people get out of there and on their way they tend to do ok,” Katzman said.

As the Trail Animals prepare to temporarily close the book on the TARC 100, Katzman hopes that this short-term final chapter is one that everyone can feel good about. He’s rooting for success for everyone – the 100-milers in particular, where he’d like to see at least as many finish this year’s race as did the inaugural year (65). He’s also hoping that the 2016 race will create some momentum for the event when it eventually makes its return.

“The best way I could script this would be that every single person – in the 100-miler in particular – would cross that finish line, and make it a team effort from the volunteers, to crews, to families, to Mother Nature,” Katzman said. “It would be incredible to me to see a 100-percent finisher rate at the 100-miler.

“And selfishly,” he added, “I’d like to see that because it would set us up so that people might not be so intimidated by this race, and after the hiatus people will think ‘Yeah, I can do this.’”