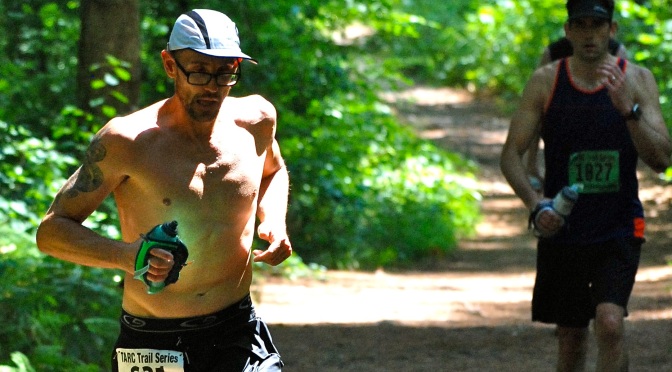 Massachusetts ultrarunners were all over the map last weekend, from the Southwest, to the Northeast, and America’s heartland. They even ran right here at home – although that will be covered in a separate article.

Jackson, 34, of Salem, Mass., took on the Mogollon Monster 100 on Saturday and Sunday, Sept. 17-18. The race, which takes place in Pine, Ariz., and navigates the Mogollon Rim, actually measures 106 miles. Add to the distance the extremely technical terrain, approximately 23,000 feet of vertical gain, and the fact that the entire course exists between 5,000 and 8,000 feet above sea level, and it’s understandable that only three runners have completed the course in less than 24 hours in the five-year history of the event.

Jackson was one of 33 runners to finish the race. He crossed the finish line side-by-side with Trent Wester, 32, of Santa Fe, N.M., as the pair tied for 14th in 31:19:08. Jackson is the first runner from Massachusetts to finish the Mogollon Monster.

After months of training at just a few dozen feet above sea level, Massachusetts residents Russ Dresher and Lisa Rising conquered the high altitude of the Rocky Mountains at the Run Rabbit Run 100/50 trail races Sept. 16-17 in Steamboat Springs, Colo.

Dresher, 34, of Hudson, Mass., was one of 223 runners to toe the starting line of the 102.7-mile race in the Tortoise Division, and he was one of 150 to complete the course and its 21,000 feet of vertical gain within the 36-hour time limit. Dresher battled to a 70th-place overall finish in 31:43:17 and earned his second 100-mile finish of the year. Dresher previously completed the Massanutten Mountains 100 in May in Virginia.

Meanwhile, Rising chose to make Run Rabbit Run her first foray into the 50-mile distance, and she handled the mountain course and its more than 9,000 feet of vertical gain just fine. Rising, 25, of Cambridge, Mass., was one of 192 runners to start the race and one of 135 to finish. She placed 56th overall and was the 14th female finisher in 11:44:24. Rising also placed sixth in her age group (F20-29).

The Barkley Marathons tempts many an ultrarunner with its grueling course, difficulty to enter, and storied lore. Two Massachusetts residents got a taste of what the full Barkley must be like when they took on the Barkley Fall Classic 50K on Saturday, Sept. 17, at Frozen Head State Park in Tennessee.

Ryan Trott and Christopher Acree were among the 119 runners to finish the 50K – not an easy feat by any means. In addition to being run on much of the same terrain where the legendary race takes place, the Fall Classic does not allow participants to wear a GPS device. In addition, runners are given the choice after 22.1 miles to drop down for a marathon finish and end their suffering early – or continue for nine more miles to complete the 50K.

Jason Lantz, 35, of Lancaster, Pa., was the overall champion in 8:20:40. He was one of just two runners to finish in less than nine hours. Only nine runners completed the 50K in less than 10 hours.

Fresh off of finishing the Ultra-Trail Du Mont-Blanc in Chamonix, France, Brian Rusiecki returned to competition stateside at the Pisgah Mountain 50K. True to form when competing in the United States, Rusiecki was back near the front of the pack.

While the overall runner-up hailed from Massachusetts, so did the women’s champion. Kehr Davis, 39, of Great Barrington, Mass., finished 12th overall and earned the victory on the ladies’ side in 5:13:39, outdistancing runner-up Sarah Slater, 38, of Guilford, N.H., who was 13th overall in 5:23:37. Kristen Peterson of Brighton, Mass., was the third-place female and 15th overall. Peterson, 25, finished in 5:25:08.

The inaugural running of the Boulder Field 100 took place Saturday, Sept. 17, in Jim Thorpe, Pa., and it included two ultra distances – a 100K and a 50K. Two Massachusetts women competed in the 50K.

Two Massachusetts ultrarunners traveled to Eagle, Wis., for the North Face Endurance Challenge 50-mile race Saturday, Sept. 17, and both finished solidly in the middle of the pack in a large field of competitors.

A total of 185 runners completed the course, and Scott Gall, 41, of Cedar Falls, Iowa, was the fastest. Gall earned the victory in 6:32:02, outdistancing the rest of the field by at least 14 minutes.

Jeffrey Lou was the lone East Coast representative and one of just three non-California residents in the field at the Coastal 50K on Sunday, Sept. 18, in Stinson Beach, Calif.

Still, the 27-year-old resident of Boston, Mass., held his own just fine.

Craig Hilsenbeck, 40, of San Francisco, Calif., was the overall winner in 5:12:25 and one of just two runners to finish in less than six hours.