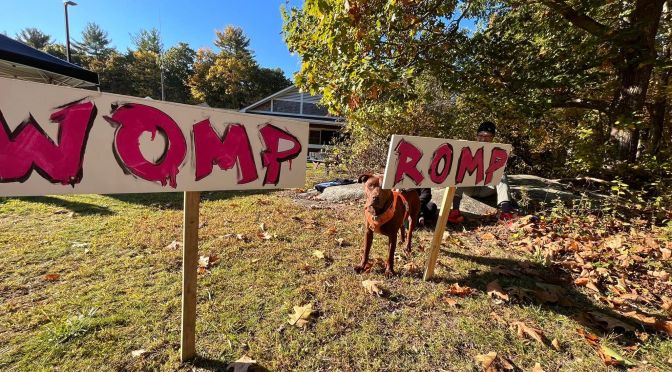 There’s something special about the trails of Wompatuck State Park.

Runners were let in on that little secret at the inaugural Womp Romp Trail Race in 2021. The first-year event invited runners to take on a 10-mile loop course that showcased all that Wompatuck has to offer. The distance was inviting for trail veterans and newcomers alike, and it attracted 100 runners to the starting line on race day. The course was amenable to fast times and first-timers. There was fierce competition for the podium positions among the front-runners, while many runners started and finished their first trail race.

It turned out runners found the course’s design, terrain, and fall foliage cravable, so the race organizers soon considered adding an ultra distance and ultimately decided to add a 50K ultramarathon to the 2022 lineup.

The second annual Womp Romp and inaugural 50K took place on Saturday, Oct. 22, in Hingham, Mass. This year’s event once again used the 10-mile loop course, but runners took on either once or three times plus a one-mile mini-loop to reach the 50K distance. The course offered a blend of rail trail, paved path, and single- and doubletrack dirt, all of which combined for a highly runnable course.

Seventy-two runners toed the starting line for the 50K race and 66 ultimately finished within nine hours. Some, such as Tim Finocchio, 44, of Holbrook, Mass., were seasoned ultrarunning veterans with 15 or more years of experience in the sport racing on a wide variety of terrain. Others, such as 49-year-old Dana Searcy of Dorchester, Mass., and 39-year-old Mitch Lindsay of Cohasset, Mass., successfully completed their first ultramarathons at Womp Romp.

Though the men’s race was close for a while, 43-year-old Nicolas Menzies of Jamaica Plain, Mass., ultimately throttled his way to victory with a decisive final loop. The talented road marathoner who has seven Boston Marathon finishes – including a 2:37:04 performance in 2010 – trailed 29-year-old Brian Malger of Quincy, Mass., by three minutes after the first loop, but Menzies moved to the front during loop two and built a one-minute cushion by the 21-mile mark. Thanks to nearly even splits for all three loops (he covered the final 10 miles in 1:20:51), Menzies blew the race open during the final loop and cruised to the win in 4:01:52.

Malger faded a bit but fought hard to hang onto second place, ultimately doing so in 4:21:00. It was the latest strong showing for Malger, who began running ultras a year ago. He posted top-five finishes at the Gunstock 50-miler and Stone Cat 50K in 2021, followed by a runner-up finish at the FIT Rock Trail Race 50K and victory at the Squatchapple 50-miler earlier this year. Malger fended off a hard challenge from 36-year-old Andrew Tidd. After running in sixth place early, the 36-year-old from Plymouth, Mass., picked his way through the field and ultimately finished third in 4:22:10. Five minutes later, 26-year-old Ryan Nicholson of Boston, Mass., finished fourth in just his second ultramarathon, logging a time of 4:27:25. After spending the entire day in the top five, 34-year-old Hamilton Kibbe of Somerville, Mass., closed out his ultra debut with a fifth-place finish in 4:32:30. Finocchio followed less than two minutes later in sixth place in 4:34:05.

The women’s race saw plenty of shuffling among the top seven finishers, and a clear leader didn’t emerge until the final miles. Among that group were relatively new ultrarunners, some longtime ultra veterans and a trio of first-timers who delivered impressive debut performances.

Christine Cappabianca and Katy Kelly set the tone from the start. The pair raced in close contact throughout the day, rarely more than a minute or two apart. By the end of the first loop they were separated by just 10 seconds with Cappabianca, 39, of Scituate, Mass., holding the narrow lead on Kelly, 54, of Dorchester, Mass. Four minutes behind them, the trio of 26-year-old Lily Moens of Cambridge, Mass., 37-year-old Corey Trahan of Tewksbury, Mass., and 46-year-old Rebecca Metrick of San Francisco, Calif., followed with 55 seconds separating them. Two minutes behind that group were 50-year-old Olga Maturana of Ashland, Mass., and 56-year-old Sheila Boyle of Concord, Mass., keeping the leaders within striking distance.

As loop two unfolded, Cappabianca and Kelly continued to duel at the front. Kelly eventually moved to the lead and hit the 21-mile mark with a 54-second advantage as she prepared for the final loop. The chase pack looked different by the end of loop two. Eleven minutes behind second-place Cappabianca, the third woman to complete loop two was 27-year-old Saltanat Duisengaliyeva. The resident of Waltham, Mass., surged from 10th place after loop one and suddenly found herself in contention for a spot on the podium. Trahan and Boyle fell off the pace a bit, but Moens was right on Duisengaliyeva’s heels in fourth, just 49 seconds back, while Maturana and Metrick followed six minutes later.

The upheaval continued in the final loop, save for the top spots. Kelly gradually pulled away during the final miles and secured the win in 5:05:00. For Kelly, it was the latest strong performance since beginning running ultras in 2021. After winning the Wildcat Ridge Romp 100K and placing second at the Gunstock 50-miler in 2021, she added a Womp Romp victory to her resume. Cappabianca also began running ultras in 2021 when she finished fifth at the Gunstock 50-miler. Womp Romp was her fourth ultra, and she finished second in 5:10:52.

After losing ground during loop two, Moens reclaimed third place and finished her first ultramarathon on the podium in 5:38:17. Metrick – a veteran of many West Coast ultras – closed hard in the final loop and nearly erased a six-minute deficit on Moens before finishing a close fourth in 5:38:25. Maturana finished fifth in her ultra debut in 5:42:36, followed by ultra veteran Boyle in 5:54:28. Rounding out the top seven was Duisengaliyeva who finished her first ultra in 5:56:45.

The women’s race came down to a strong push at the finish as Parker, 28, of Quincy, Mass., fended off a tough challenge from 53-year-old Michelle Lauterback of Sherborn, Mass. Parker finished first in 1:26:41 and Lauterback followed a minute later in 1:27:42. Gwenyth Taradash, 22, of Dartmouth, Mass., rounded out the podium in 1:31:43.