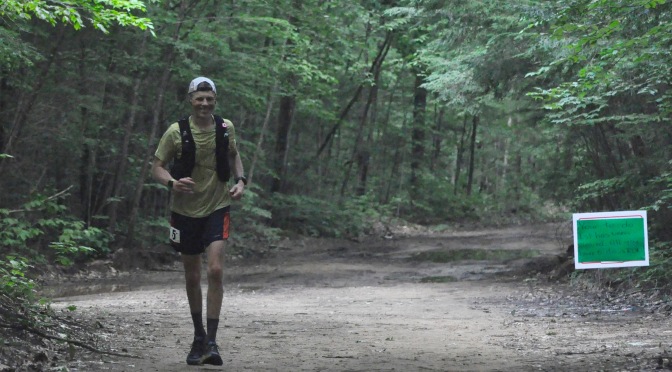 WEST CHESTERFIELD, Mass. — Amy Rusiecki knew the soundtrack to the Chesterfield Gorge Ultra would be the sound of water. Rusiecki, the race director and a resident of nearby South Deerfield, runs regularly at the Trustees of Reservations’ Chesterfield Gorge Reservation, so she’s deeply familiar with the burbling of the Westfield River as it flows alongside the rock and dirt jeep road that serves as Rusiecki’s race course.

The sounds of the river were just one of the many things that Rusiecki hoped to share with runners about one of her favorite training grounds when she founded the event in 2018. Waterfalls gurgle and splash down from the hills above, making their way to the river after several days of rain and a morning thunderstorm. The smell of the forest is strong, too, held in by a thick canopy of trees that hug most of the out-and-back course that amounts to 15 miles round-trip.

Rusiecki loves it all. Still, if the river was the A-side of Rusiecki’s soundtrack to the Chesterfield Gorge Ultra, then it was the B-side — the sound of laughter, of cheering, of high-fives and congratulations — that she savored the most while standing at the start/finish area on Saturday, July 10, while cheering for runners and greeting finishers.

“It’s so great to be here,” Rusiecki said, moments after she’d darted to the finish line to congratulate Chandra Orrill of Fall River, Mass., who’d just completed her first 50K on her 50th birthday. “And I think not just for me, but for the whole community, there’s energy, there’s magic when we all come together. Whether it’s the magic of seeing your ultra friends, finishing a new distance, getting a PR, whatever it is, there’s this magic that’s here. For me, it’s the magic of seeing people do that and even just at times sitting back and listening to the laughter and cheering for other people and that sort of thing.”

Rusiecki missed the magic in 2020 when she postponed the event multiple times, hoping to make it happen, before ultimately being forced to cancel due to the pandemic. She’s also the race director for New England classics Seven Sisters and the Vermont 100, in addition to the Mt. Toby 50K and Race for DFL. All of those events were also canceled due to the pandemic, and a few were canceled again in 2021.

“Part of the struggle during COVID in general is that we were isolated from this,” Rusiecki added. “This is what brings us life and energy and joy, and not having it felt … it was that much harder to kind of make it through stuff. I think a lot of people have (missed this).”

The atmosphere at the race indicated that was true, as did the numbers. The race attracted 160 runners, the most in its brief history, despite being announced just six weeks prior to race day.

“People were hungry,” Rusiecki said. “We only announced this six weeks ahead of time because with COVID that was when we got the clearance and permits were allowed.”

While the pandemic is far from over, the New England states are leading the country in vaccination rate which has enabled races to resume and people to feel more comfortable. Still, with the runners scattered over multiple distances, two days, and a long out-and-back course, social distancing took care of itself.

“Luckily, this is a small enough and low-key enough event that I think it felt accessible to people who maybe weren’t in a place where they wanted to be among a big crowd but they wanted the ultra experience, so it worked out well,” Rusiecki said.

For their part, the runners were just as thrilled to have the opportunity to race in-person again, and they savored the scenic course while navigating its sneaky challenges. An early-morning thunderstorm doused the 100-mile runners just as they were about to start. Even though the rain gave way to comfortable temperatures and sunny skies, the tree cover held in the humidity and tested the hydration, nutrition, and strategy of runners at every distance.

“When I realized the humidity was not going away, I revised my plan and decided it was better to just finish ant not be sick,” said Maria Chevalier, 46, of Cumberland, R.I., as she neared the end of her third of four trips through the course in the 100K race. Her strategy worked, and a few hours later she finished in first place.

In addition to the humidity, the terrain was equally sneaky. With good footing throughout and all of the hills either rolling or brief, every step of the course was runnable. That meant fast times could be had, but that runners also had the potential to burn out early if they weren’t careful.

“The course is tough because everything is runnable,” said 100-mile competitor Sam Farnsworth, 60, of Stow, Mass., who was around halfway through his race and following his coach’s advice to take forced walks at various time intervals. That strategy worked to his advantage and he celebrated his second 100-mile finish early the next morning.

The cheers and laughter echoed long into the night and the following morning as runners trickled into the finish line at various distances. Four runners ultimately completed 100 miles. Jennifer Kenty, 39, of Medford, Mass., took home the overall win and set a new women’s course record with her time of 21:08:09, taking 5 ½ hours off of the previous record by Theresa Berna from 2019. Farnsworth followed a little over two hours later in 23:24:15, establishing an age group record and setting a personal record for 100 miles by nearly an hour. Matthew Cadieux, 40, of Westfield, Mass., followed in 24:31:41, and Paul Notari, 51, of Bridgewater, Mass., rounded out the finishers in 26:47:25 for his first 100-mile finish.

Eighteen runners completed the 50-mile race, led by 32-year-old Natty Montoya of Richmond, Va., who set a new course record in 7:23:42. He was followed by 37-year-old Benjamin Simanski of Greenfield, Mass., who established a new course record for visually impaired runners, clocking a speedy 8:40:06 while placing second overall. Russell House, 24, of Easton, Pa., rounded out the men’s podium in 8:45:49, setting a new 20-29 age group record along the way. Shortly after House finished, 52-year-old Claire Gadrow of South Kingstown, R.I., crossed the finish line fourth overall while topping the women’s field and setting a new age group record in 9:06:38. Sarah Bousquet, 39, of South Hadley, Mass., followed in 10:34:46.

The largest of the ultra distance fields was the 50K, where 51 runners completed two out-and-back trips through the course. Though the course records survived at that distance, overall winner Corey Mullins, 28, of Boston, Mass., set a new 20-29 age group record with his time of 3:47:45 while outdistancing the rest of the field by nearly a half-hour. His closest competitor, 37-year-old Nicholas Triolo of Williamsburg, Mass., finished in 4:14:28, just ahead of third-place finisher Danny Hartman, 36, of Easthampton, Mass., who crossed the line in 4:18:00. Carina Halloran, 45, of Durham, Conn., topped the women’s field in 4:58:38, followed by 36-year-old Emily Hoar of Charlotte, N.C., in 5:12:06, and 30-year-old Emily Andrews of Watertown, Mass., in 5:16:39.

Seventy runners turned out on a comfortable Sunday morning for the 25K race, and they were greeted to ideal conditions for their one out and back trip on the course. Racing under sunny skies, a shady canopy of trees, and in temperatures in the 60s, runners capitalized on the day by toppling the course records.

Mark Rabasco, 26, of Pittsfield, Mass., and Mike Coffey, 37, of Hopewell Junction, N.Y., had Kurt Hackler’s 2018 course record in their sights throughout the race, though whether they’d get it was in question until the home stretch. Ultimately, the duo finished side-by-side in 1:41:41, tying for the win and breaking Hackler’s men’s course record by 16 seconds. Andrew Woodbury, 39, of Westfield, Mass., rounded out the men’s podium two minutes later in 1:43:43.

The women’s course record also fell in the 25K, though Melissa Cooney didn’t have to sweat it in the final meters. Cooney, 42, of South Hadley, Mass., raced well ahead of record pace and set a new course standard with her time of 1:54:35. Aubrey Senterfitt set the previous record of 1:58:26 in 2019. Sylvie Mahon-Moore, 17, of Leeds, Mass., finished second in 2:09:40, and established an under-20 women’s course record with her performance. Sarah Nelson, 45, of Florence, Mass., rounded out the women’s podium in 2:12:43.