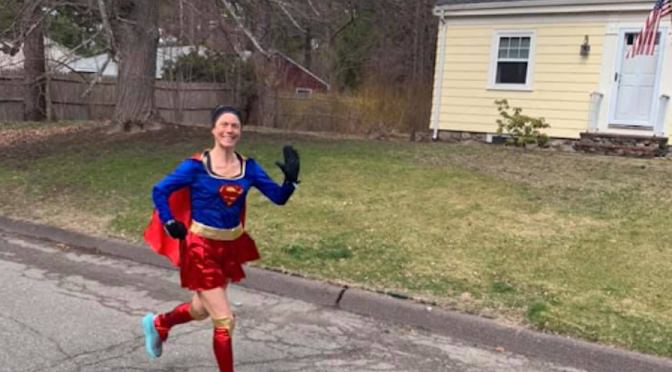 March 20 wasn’t a typical Friday in Lynnfield, Mass. In fact, it may have been the strangest of Fridays in recent memory for residents of that town and many others throughout Massachusetts, for it was the Friday that closed out the first week of a partial statewide shutdown to help slow the spread of the COVID-19 global pandemic.

Schools had been shuttered on short notice, forcing parents and teachers to scramble to figure out childcare solutions. Many people transitioned to working from home while some were laid off. Restaurants closed. Barber shops and hair salons locked their doors. Parks and playgrounds were deemed off limits. These were strange times, indeed.

It had been a surreal first few days of circumstances that would eventually stick around for more than a month. As that first week of partial lockdown wound to a close, many people felt confused, lost and uncertain of what would come next. Many surely found themselves longing for a hero to rise and make this pandemic and the problems it brought simply go away. For many bewildered residents of Lynnfield who were in the right place at the right time on March 20, that hero took the form of Wonder Woman running down the street with sword in hand to help maintain six feet of social distancing.

It turned out the DC Comics superhero was actually Lori Mitchener, a Lynnfield resident, college professor, and accomplished ultrarunner. She had decided to have a little fun with her afternoon run and give her neighbors a good laugh during a stressful time.

The idea arose on a whim while relaxing at home with her significant other, Paul Chekal, and her daughter, Zoe, shortly after Zoe moved back home when her college closed due to the coronavirus.

“On the Friday before things started getting wild, we were all sitting there and I said to Zoe, ‘I’m going to run as Wonder Woman. Can I borrow your costume and sword?’” Mitchener recalled. “It was a costume my daughter got a few years ago and I told her she’d never leave the house with that on … now here I am.”

“I wasn’t planning on doing this streak of costumes,” Mitchener said. “And then so many people thought it was hilarious and thought it was great. A couple people said, ‘that’s exactly what I needed today.’”

If running in a costume could give people a lighthearted reason to laugh and briefly forget about the disruption the pandemic has brought to their lives, she figured it was something worth continuing. That’s why Mrs. Claus was seen running through Lynnfield’s MarketStreet retail, dining and entertainment district three days later as a light snow fell.

“I have quite a few costumes between myself and my daughter,” Mitchener said. “She likes Comicon and stuff like that, so some of the costumes are hers. We have run a couple Christmas races so that’s why I have Mrs. Claus and the elf one and another I haven’t busted out yet. Also, a local costume shop owner said we’ve got a bunch of costumes and just donated them, so I’d say about half I already had and the other half were donated.”

The very next day, Superwoman was spotted cruising through the streets, followed a day later by Snow White.

On Friday, March 27, a Lynnfield neighborhood was treated to a sumo wrestler being chased by a T-Rex courtesy of some mother-daughter teamwork.

“My daughter has been asking for one of those T-Rex costumes,” Mitchener recalled. “She’s a hurdler on the Goucher College track team in Baltimore. She was the T-Rex, and that was her workout for the day. The sumo costume that I was in is hers, too. We ran about a mile in those, and that was not easy.”

Running in the inflated, wobbly suits was awkward, but the response was absolute gold.

“People were howling laughing,” Mitchener recalled. “We’ve just been having fun, like how weird can it be? You turn the news on and sometimes I just have to stop and think… is this actually happening? I thought 2019 was weird, and now this, so if people see me out running in a costume, I hope that’s the weirdest thing they see all day.”

A few days later, both Phoenix from X-Men and Elsa from Frozen were seen running through Lynnfield, much to the delight of adults and small children alike.

“A few people have asked if you wear a certain costume, can you let me know and run by my house so I can let my kids know,” Mitchener said. “If somebody can laugh and I’m going to be out there running anyway, I might as well take something weird and make it weirder.”

To be certain, Mitchener is going to be out there running anyway, though all but the sumo/T-Rex run have been solo. She averages 105-110 miles per week, occasionally pulling back to 70-80-mile weeks to recover. Mitchener has been running ultras since 2013, but 2019 proved to be a breakout year for her at the 100-mile distance with victories at the Keys Ultra 100-miler in Florida in May, the Pine Creek 100-miler in Pennsylvania in May, and the Daytona 100-miler in Florida in December.

Mitchener was supposed to run the Boston Marathon on April 20, but it was postponed until September. She also entered the Nike 100, only to have it canceled hours after she registered. She ran the Vernal Equinox 24-Hour Virtual Ultra on April 4, completing the majority of it in small laps of her driveway, and finished first woman, fifth overall, with 101.54 miles in 22 hours.

With races canceled and nothing to seriously train for, Mitchener is still logging big mileage weeks but dialing back on the speed and seriousness while focusing more on spreading some lighthearted fun to her community.

She’s up to 12 or 13 costumed runs so far–Little Red Riding Hood and Mrs. Frosty the Snowman are the most recent appearances–and has plans for more.

At a time where people are looking for heroes, be it the grocery store clerks, truck drivers and shelf-stockers keeping the food supply moving, delivery drivers and postal workers bringing essential homegoods to our doorsteps, or doctors and nurses providing life-saving care during the pandemic, Mitchener will keep doing what she can for residents of Lynnfield who are discovering that laughter is a strong medicine during these unusual times.

“Let’s not take running too seriously right now; it’s a global pandemic,” she said. “I think my plan right now is to keep doing it until we’re not on lockdown anymore.”