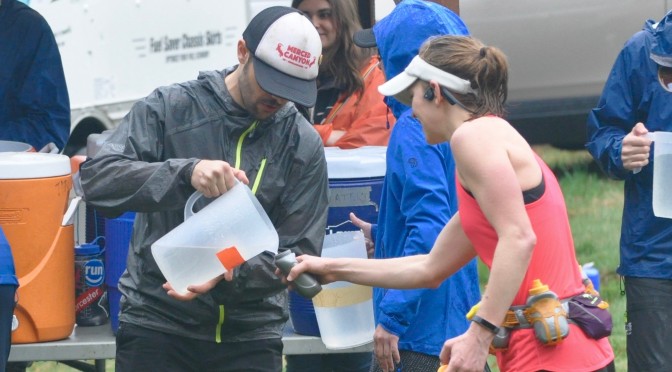 Four-hundred laps around a track seems awful – at least to me. Running 402.3 laps sounds even worse.

That’s exactly what Joe McConaughy did on Saturday, Dec. 21, however. The 28-year-old Boston resident set out to complete 402.3 laps – 100 miles – on the Anderson High School track in Cincinnati, Ohio, as a fundraiser for the Crohn’s & Colitis Foundation. His wife, Katie, was diagnosed with Crohn’s four years ago, so it’s something that has touched their family deeply.

Ultrarunning is a selfish endeavor in many ways. The countless hours and miles required just to prepare to run even longer distances mean that other people and activities are often put on hold. Joe’s track feat reminds us that our running can be done in service to others, too, and we can use ultrarunning as a vehicle for doing tremendous good. There is no cure for Crohn’s – at least not yet – but we’ll hopefully be a few steps closer to finding one thanks in part to the efforts of Joe and Katie.

Katie, a Cincinnati native, coordinated logistics and led Joe’s support crew, as she has done on several of his successful trail exploits. Joe took care of the running. Together, they set a goal of raising $402 – a dollar for every lap – but they quickly smashed through that number and hit the $600 mark before Joe even stepped foot on the track. They established a new target of $1,000, and as Joe ran and Katie crewed the donations poured in. They blew right past $1,000 and soon eclipsed $2,000.

Joe stopped after 12:53:28, his 402.3-lap/100-mile mission achieved, but the donations didn’t cease to roll in. A few hundred post-run dollars were contributed, pushing Joe and Katie’s contribution to the Crohn’s & Colitis Foundation to $2,532 as of this writing. Click here to keep the total growing.

Thinking back on what Joe and Katie accomplished at the track, I was reminded of the many ways that our ultrarunning family is full of givers. The form that “giving” takes may differ from person to person and event to event, but the “giving” is part of what binds us together and allows our community to grow and thrive.

Looking back through stories from this year, several highlighted the “giving” side of our community.

Participants in the Berkshire Ultra Running Community for Service’s (BURCS) Free to Run Trail Races compiled 82 pairs of running shoes and additional gear for women and girls in Afghanistan to be able to take part in running and other physical activity; and runners at the BURCS’ Sweltering Summer 8-Hour Ultra amassed $6,800 for Moments House, a Berkshire County facility that provides complementary care and services for residents battling cancer, as well as their family members.

The Trail Animals Running Club’s TARC Summer Classic raised nearly $2,000 for the Trustees of Reservations at this year’s race, and TARC’s classic ‘Don’t Run Boston’ Ultras continued the tradition of collecting donations for the Blue Hills Reservation’s Trailside Museum rather than charging runners an entry fee. The Village Ultra in New Salem raised money for the Refugee and Immigrant Center for Education and Legal Services. Additionally, two of Massachusetts’ newest ultras – the Chesterfield Gorge Ultra and the Mt. Toby 50K – contributed proceeds to the Hilltown Land Trust and Girls on the Run of Western Massachusetts, respectively.

That’s a lot of giving in one year, and it’s far from an all-inclusive list.

Among the more ambitious examples of giving, Waltham native Henry Ward completed the Boston Quad – a back-to-back-to-back-to-back running of the Boston Marathon course that concluded with the actual Boston Marathon. Supported and paced by numerous runners in our community, Ward’s effort has raised thousands of dollars for RunWell, a foundation that helps those battling addiction and mental illness to live healthy, fulfilling lives through treatment and physical activity. Simply put, Ward pounded out the miles to help others recover from addiction and discover the life-changing power of running that we enjoy.

While Ward’s style of giving – like Joe and Katie’s – took the form of a bold personal initiative, yours might have been different in format while just as impactful. Perhaps behind-the-scenes was more your style as a crew member or pacer, helping a friend, family member or stranger achieve something special. Maybe you put in countless hours marking (and re-marking) trails, reserving port-a-potties and obtaining permits as a volunteer race director so others could pursue personal glory; or maybe you donated a day or weekend keeping runners fed and hydrated while fending off heat exhaustion or frostbite as an aid station captain or volunteer.

Maybe the reason we have trails to run on and enjoy is because your preferred way of giving is through trail building and trail maintenance, be it sawing fallen trees, cutting new trail, repairing eroded sections, or simply picking up trash left behind by others.

The beauty of giving is that every little bit counts. Every effort – no matter how big or small – makes our community a stronger, better place to be. So as we close out 2019 and prepare for a new year, I’d like this – the 146th and final piece of local content for the year – to be a celebration of all the givers in our community. Thanks for all that you do. I look forward to spending my fifth year running this site telling more of your stories and highlighting even more of the good our community does in 2020.

I’ll see you on the trails again soon.