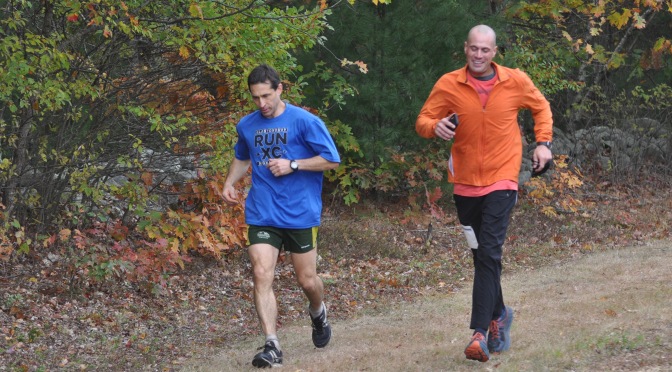 PELHAM, Mass. – About a dozen runners – some with weary legs, others still surprisingly fresh – lingered by their aid supplies just a few feet from the starting line. They had three more minutes before it was time to go again.

The group had been considerably larger – the initial gathering was 27 strong – when they toed the line for the first time hours earlier under a morning mist. The mist was long gone now, as were the clouds above and more than half the field.

The inaugural Race for DFL last person standing event had already taken its first victims on this seasonally comfortable October Saturday, with temperatures in the upper 50s, but it would claim many more before just one runner – the Dead F-ing Last runner – remained as the victor.

“It’s supposed to be a full moon tonight … not that that says anything about you crazies,” race director Amy Rusiecki joked as the runners ambled back to the starting line.

Moments later, Rusiecki sent them on their way. Hour number eight had commenced.

The Race for DFL is the first last person standing-style ultramarathon in Massachusetts. The concept has exploded in popularity in New England and across the country in recent years, and most are modeled after the original Big Backyard Ultra in Tennessee (this year’s Big Backyard Ultra begins on Oct. 19).

A highly accomplished ultrarunner and race director (7 Sisters Trail Race; Vermont 100), Rusiecki has introduced new races to the Massachusetts ultra scene in recent years, starting with the Chesterfield Gorge 30-hour ultra in 2018 followed by the Mt. Toby 50K in 2019. The Race for DFL was her latest creation, in collaboration with ultrarunner Scott Rhodes who offered the large field behind his home to serve as the race headquarters and runners’ campground. Rhodes mapped out a 4.16-mile loop course in the woods.

Runners had one hour to complete the loop and return to the starting line to go again. Those missing the cutoff were eliminated until only one runner remained.

Some last person standing events use a trail option during the daylight hours and move to a road during the night. Not the Race for DFL. Runners stayed on the trail for the duration of the event, and the course was some classic New England singletrack minus the serious climbing. Runners gained around 400 feet of elevation per loop, and almost all of it came on forested singletrack trails, save for a tenth of a mile at the start and finish in the field by race HQ and a quick trail connector section on a dirt road. The loop was constantly rolling, much of it blanketed in pine needles or fallen leaves from trees golden with the season, and plenty of trip hazards scattered about, from rocks and roots to several fallen trees. It was the sort of terrain that runners from the region might handle with relative ease during the early hours, but it was enough to pack a punch in the darkness.

Time and the trail took their toll as the day progressed. Just 11 runners headed out for the ninth hour, and 10 completed double-digit laps. The numbers dwindled from there as darkness soon set in and the full moon rose.

Sam Farnsworth, 59, and Sophia Farnsworth, 25, both of Stow, Mass., called it a day after 10 laps and 41.7 miles, as did 38-year-old Benjamin Bovee of Ludlow, Mass. Fernando Salcido, 47, of Somerville, Mass., did one more loop before joining others around the campfire. Just a few weeks removed from completing the Run Rabbit Run 100-miler in Colorado, Salcido finished with 45.8 miles.

Six runners remained, but not for much longer. The 12th loop was the final one for 16-year-old Will Draxler of Heath, Mass.; 35-year-old Pedro Grullon of Lawrence, Mass; 54-year-old David Champoux of Florence, Mass.; and 50-year-old David Catarius of Shrewsbury, Mass. All concluded their day with 50 miles on their legs.

It was the first ultramarathon for Draxler, and the teenager held his own with several seasoned runners. With his impressive day complete, he joined the others in sitting back and watching as two accomplished ultrarunning veterans dueled for a few more hours.

Stephen Anthony and Howie Breinan spent plenty of time running and hiking together throughout the day. Both Anthony, 38, of Rumford, R.I., and Breinan, 50, of Hebron, Conn., stuck to their strategies effectively, and their longevity in the race was a testament to that consistency. After 15 laps and 62.5 miles, however, Breinan  – who recently turned in a top-20, sub-24-hour finish at the Angeles Crest 100-miler – was done. That meant Anthony had to knock out one more loop solo for the win, and it was something the 2019 finisher of both the Eastern States 100-miler and IMTUF 100-miler was up for.

On a day where most of his loops produced consistent splits within a 2- to 3-minute range, Anthony saved his fastest loop for last, running through the woods and hopping over trip hazards by the glow of his headlamp and the full moon. He received a high-five from Rusiecki and loud cheers from his fellow competitors and spectators as he crossed the finish line. After 66.7 miles of running, Anthony was the Dead F-ing Last runner – and the victor