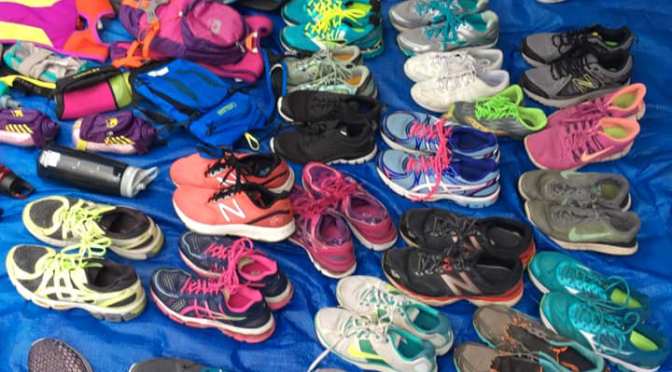 Months before the fifth annual Free to Run Trail Races took place on Saturday, Sept. 14, trail- and ultrarunners had already begun dropping off shoes with race organizers from the Berkshire Ultra Running Community for Service that would ultimately go to the non-profit organization that shares the race’s name.

The BURCS first held the event and its 50-mile, marathon and half marathon races in 2015 to support Free to Run and its efforts to empower women and girls through running and other physical activities in conflict zones such as Afghanistan. The organization was founded by Canadian ultrarunner Stephanie Case. As part of the collaboration between the BURCS and Free to Run, the race in recent years has collected lightly worn running shoes for Free to Run to distribute to its program participants.

By the time runners began assembling at Pittsfield State Forest for the race on Saturday, race directors Jake Dissinger and Michael Menard already had received more than 30 pairs of running shoes. An additional 50-plus pairs of shoes were collected on race morning, as were four hydration packs, several water bottles, a few Garmin watches and some trekking poles. It was a massive haul that will help ensure runners in Free to Run’s programs have proper footwear and supplies for their running endeavors.

With the sneakers and supplies collected, runners huddled at the starting line and listened to pre-race instructions from Menard before being sent down the trail. For those in the 50-miler –  which started four hours before the shorter races – that meant four loops of the 12.5-mile trail course and 10,000 feet of vertical gain. The deceptively difficult course includes two major climbs per loop, the first being a long, gradual ascent alongside a creek during the first two miles and the second a long, steep, hands-on-knees ascent around the loop’s midpoint. Additionally, plenty of rocks, leaves, downed trees and a steep, winding descent make it a bruiser of a course.

Seventeen runners started the 50-miler and 14 ultimately finished within 16 1/2 hours. In terms of speed, the 2019 race didn’t match up to the 2016 and 2017 races that saw the course records established, however, it did produce the most competitive men’s race in Free to Run history with the top three runners finishing within a less than seven-minute window. Jason Roberts ultimately held off Daniel King and Albert Propst, but it wasn’t easy. Roberts, 40, of Trumbull, Conn., held a 10-second lead on King and Propst after the first loop and then took control of the race during his second trip around the course, eventually stretching his lead to 15 minutes. While Roberts ran solo, King and Propst stuck together. King, 31, of Nicholson, Pa., and Propst, 33, of Dalton, Pa., ran nearly side-by-side for the entire race. Working together, they slowly inched closer to Roberts, chipping two minutes off of his lead during the third loop and another six during the final loop. It wasn’t quite enough, though, as Roberts earned the victory in 12:12:41. Roberts and Propst finished together in a second-place tie in 12:19:04. Todd Chiaramida, 43, of Sharon, Mass., was a distant fourth in 12:57:48.

In the women’s race, 34-year-old Mary Troy of Southwick, Mass., led from wire to wire. She held a six-minute lead on her closest competitor after the first loop and then steadily added to her advantage the rest of the way, ultimately winning in 13:01:01. Ann Alessandrini, 59, of Johnsonville, N.Y., was a distant second in 14:31:33. Two runners – 50-year-old Carla Halpern of New Salem, Mass., and 30-year-old Hannah Muszynski of Leverett, Mass. – ran together and tied for third in 16:19:54.

In addition to the 50-mile ultramarathon, runners also had the opportunity to race shorter marathon and half marathon races that consisted of two or one loop of the course plus a little extra distance on the park road at the beginning.

In the marathon, 28-year-old Carolyn Harper took home the overall win and smashed the women’s course record by 15 minutes (Samantha LeBlanc set the previous record of 4:39:14 in 2018). It was the second race she has won outright this year, having previously won the TARCtic Frozen Yeti 30-hour race in February when she was the lone runner to go beyond 100 miles. Harper, of Somerville, Mass., trailed the top two men after her first trip around the course – 44-year-old Rufus Chaffee of Northampton, Mass., was nearly two minutes ahead and 31-year-old Stephen Horaj of Stoneham, Mass., was four seconds in front of Harper. During loop two, however, Harper moved to the front and took control. In fact, she negative-split the race and pulled away for the win in 4:24:16. Chaffee finished second overall and first in the men’s field in 4:33:29; Horaj was the third overall finisher and men’s runner-up in 4:48:15. Jarred Grignon, 31, of Dalton, Mass., rounded out the men’s podium in 4:52:53. The women’s runner-up was 53-year-old Michelle Lanouette of Wauwatosa, Wisc., who finished in 5:20:09. Eleni Peterson, 26, of New Ipswich, N.H., was the third-place female in 5:38:18. Twenty-two runners completed the marathon.

Similar to the marathon, the women’s course record also fell in the half marathon. Charlotte Walmsley, 25, of Weston, Mass., and 29-year-old Kristin Ritchie of Northampton, Mass., went toe-to-toe in a closely contested race that came down to the final mile. Walmsley ultimately emerged with the win in 2:00:17, eclipsing the previous course record of 2:14:28 set by Alexandra Brinkert in 2018. Ritchie also dipped under the previous record while finishing second in the women’s field in 2:01:04. Kristen Peterson, 28, of Cambridge, Mass., rounded out the women’s podium in 2:15:00. In the men’s race, 34-year-old Steven Sandman of MIllerton, N.Y., turned in the second-fastest time in course history, winning in 1:55:07, followed by 38-year-old Adam Brown of Sandisfield, Mass., in 1:59:50. The third-place male, 45-year-old Kevan Hauver of Coventry, R.I., finished in 2:00:50, capping a competitive race. Sixty-nine runners finished the half marathon.

One thought on “Runners Pile Up Shoes, Miles at Free to Run”