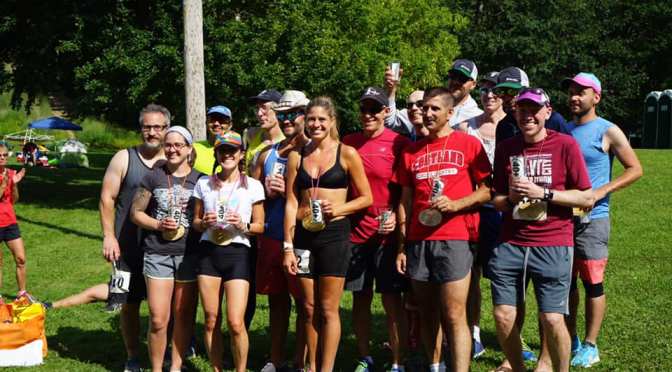 For the past four years, Greg Soutiea had his speedy legs firmly planted on the top of the podium at the Berkshire Ultra Running Community for Service’s Sweltering Summer 8-Hour Ultra.

Soutiea dominated the race each year, always winning with at least 5 1/2 miles more than his closest competitor. The former resident of Quincy, Mass., now lives on the Maine coast, making the trip to Clapp Park in Pittsfield, Mass., a particularly long haul. As a result, after dominating the race from 2015-2018 when he secured the four biggest mileage totals in race history, Soutiea was absent from the seventh annual event on Saturday, Aug. 10. That meant a new champion would be crowned at the race around the .355-mile loop cinder track at Clapp Park.

And what a race it was.

The top three runners raced closely for the duration of the event, with the overall winner in doubt until the final minutes. Sweltering Summer veteran Pablo Espinosa, 39, of St. Polycarpe, Quebec, had his sights set on his first win at the race following a runner-up finish in 2017 and fourth-place finish a year ago. At the same time, event newcomers Eric Ciocca, 41, of Northampton, Mass. (Enchanted Forest 6-Hour Ultra winner in 2018 and 2019) and Yuki Chorney, 47, of Mont Vernon, N.H. (overall champ at 2017 Ghost Train 75-miler; women’s champion at 2018 Drummer Hill 50K, Joe English Twilight Challenge 6-Hour and runner-up at Ghost Train 100-miler) began the day with big miles in mind. All three had high expectations, and all three delivered.

Hour after hour, they raced around the track and steadily put miles between them and the remainder of the field. As the morning turned to afternoon they reached and then surpassed the 40-mile mark. Eventually they reached 50 miles and kept going – the only people in the 104-runner field to achieve that milestone. After the final minutes elapsed and the final mileage was tallied up, Ciocca emerged as the top finisher with 52.22 miles, followed one lap behind by Espinosa with 51.87 miles. Chorney placed third overall and first in the women’s field with 51.16 miles. Chorney’s total earned her the No. 2 position on the women’s course record board, trailing only Daniele Cherniak’s 51.83 miles from 2014.

While Ciocca, Espinosa and Chorney were the lone runners to surpass the 50-mile mark, plenty of other runners from the largest field in event history had big mileage days. Seventy-five finished at least a marathon, 52 at least a 50K, and 21 ran 40 miles or more.

In addition to the 8-hour race, another 15 runners took part in a 5K race on the same loop course. Joel Pekosz, 42, of Cheshire, Mass., finished first among the men in 20:48 while 34-year-old Bethany Fitzroy of Plainville, Mass., was the first-place female and second overall finisher in 24:22.