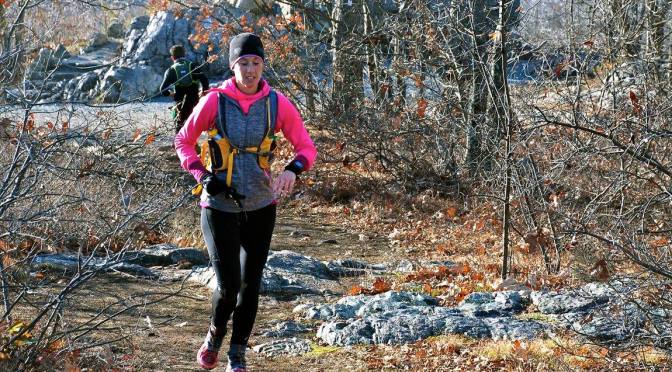 During more than six years as an ultrarunner, Kara Olivito has frequently felt herself called to rugged mountain races like the Tahoe 200 in California, the Infinitus 48-hour in Vermont, and the Cloudsplitter 100 in Kentucky. She has thrived on those challenging courses and earned top-10 finishes each time. That said, some of her most meaningful miles have been run near the ocean – specifically on Cape Cod.

“The Cape is a special place for me, as I spent all my summers there as a kid and my parents now own property there,” Olivito said. “In every event my only goal is to finish smiling, which was definitely the case Sunday.”

The Sunday Olivito referenced was April 7 at the Crane Wildlife Management Area in Falmouth, Mass., where Olivito ran the 50K ultramarathon at the sixth annual Cape Cod Trail Race. It was her third time running the race, as well as her third time winning. Olivito won the race in 2016 (5:28:42) and then defended her title in 2017 (5:25:20). After a year away in 2018, she returned this year and had her finest run yet on the course. The 36-year-old resident of Medford, Mass., capitalized on the warm, dry conditions and cruised to a victory while outdistancing the women’s field by more than 40 minutes. Olivito’s winning time of 4:42:14 was good for a new women’s course record, smashing the previous mark of 5:02:11 that was set by Kelly Manchester in 2014.

While Olivito took down the women’s course record on Sunday, the men’s mark stood its ground. Nobody matched Eric Ahern’s record-setting run of 3:44:53 from 2014 when the resident of Somerville, Mass., ran away from the field, but the fourth-place finisher at that inaugural race captured the men’s victory in 2019. Padraig Mullins finished fourth in 2014 in 4:18:00, and the 37-year-old resident of Cambridge, Mass., made his long-awaited return to the Cape for this year’s race. He brought home the victory in 4:16:38, topping his closest competitor by more than four minutes. Cody Cutler, 34, of Sterling, Mass., was the men’s runner-up in 4:21:05, followed by 33-year-old Andrew Tidd of Plymouth, Mass., in 4:30:23.

In addition to the ultra, the event also included half marathon and 10K distances.
The half marathon went down to the wire between the top men. Kai Van Horn, 34, of Cambridge, Mass., held off 30-year-old Ryan Kempson of Brewster, Mass., by a mere 30 seconds for the win. Van Horn finished in 1:29:01 and Kempson in 1:29:31. Harper Gay, 32, of Brookline, Mass., rounded out the men’s podium in 1:30:56, nearly two minutes ahead of his closest challenger. Meanwhile, 26-year-olf Miriam Axelbaum of Cambridge, Mass., earned the women’s win in the half marathon, posting a time of 1:35:15 that outdistanced the field by more than four minutes. Tierney Spencer, 21, of Cross River, N.Y., was second in 1:39:54, followed by 19-year-old Katie Baker of Roxbury Crossing, Mass., in 1:44:57. There were 146 finishers of the half marathon within four hours.