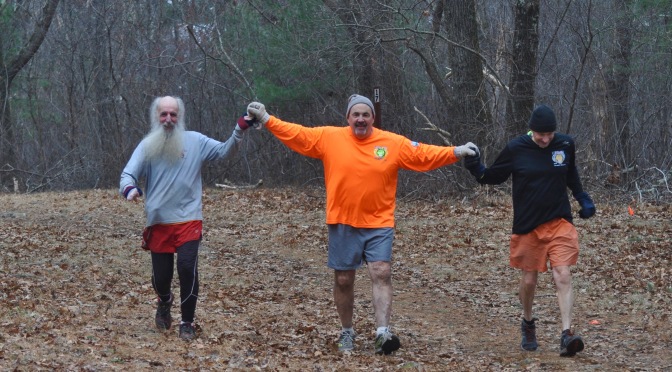 TOPSFIELD, Mass. – A thunderstorm inched closer to Topsfield during the morning hours on Saturday, Jan. 5, creating an ominous sky above and around Bradley Palmer State Park.

Runners coming to the G.A.C. Fat Ass 50 from the north and south drove through spurts of steady precipitation. Upon arrival at the park, however, they experienced reprieve from the rain. Radar showed that the storm that for hours had barreled toward the park split as it neared the Topsfield town border. There was rain to the north and rain to the south, but Bradley Palmer State Park was dry. Indeed, it was a good day to run.

“Good morning!” race director Roger Martell greeted the group that gathered at the crowded starting line. “Happy New Year. “Thanks for coming. I think we have the most runners we’ve ever had.”

Martell instructed the roughly 150 runners to follow the orange flags and ribbons. Then, with a quick “On your marks … get set … go!” he sent them on their way down the park road and onto a frozen trail.

Runners had the option complete up to five 6.2-mile loops for a 50K, or they could run or hike as few as one loop. Speed and distance weren’t taken too seriously, though. The G.A.C. Fat Ass 50 is one of the oldest ultras in Massachusetts dating back to the 1990s, and the race prides itself in bringing friends together to run. Some ran fast, like Patrick Caron of Needham who threw down a course-record time of 3:23 for the 50K, or Natick’s Molly Karp who was the women’s winner in 4:47.
Some, like Waban resident Dima Feinhaus, ran solo and managed to spot some wildlife in the solitude of the woods. Feinhaus started the run early, and he spotted a coyote on the course during his first loop of the morning before many other runners had stepped foot on the trails.

Many others took their time and ran in small packs, trotting at a relaxed pace and clicking away the miles while chatting with friends.

“It’s not work!” said Jim “Gilly” Gilford, smiling while responding to a “nice work” comment as he ran through a clearing in the forest near the end of his first loop. Gilford, a lifelong Topsfield resident who leads the free G.A.C. running club that puts on the race and many other events, made the most of his miles on the trail by catching up with good friends.

Bringing people together is what the race is all about. In fact, that’s what keeps Fairhaven resident Kevin Mullen coming back each year.

“These guys have been putting this on for years,” Mullen said. “I love getting out here. Some of these people I don’t usually get to see, but I always see them here.”

Ultimately, runners were simply happy to be starting a new year on the trails together on a comfortable, 39-degree day. They didn’t get the chance in 2018 when the race was canceled due to frigid conditions that included strong winds and a high temperature in the single digits. The 2017 event – the 19th year of the race – featured a mid-morning snowstorm that sent most runners headed for their cars early. Of the 100 or so runners that year, just 11 finished 50K that year and another 16 completed a marathon. The 2019 race saw 30 runners finish the 50K and another eight completed a marathon.

The rain didn’t completely miss the race this year. A few five-minute spurts of light sprinkles fell on the runners during the first three hours, and a light rain fell toward the end of the day as the final miles were being completed. Still, it wasn’t enough stop one of the Bay State’s oldest ultras from having a highly successful day to kick off the 2019 ultrarunning year in New England.