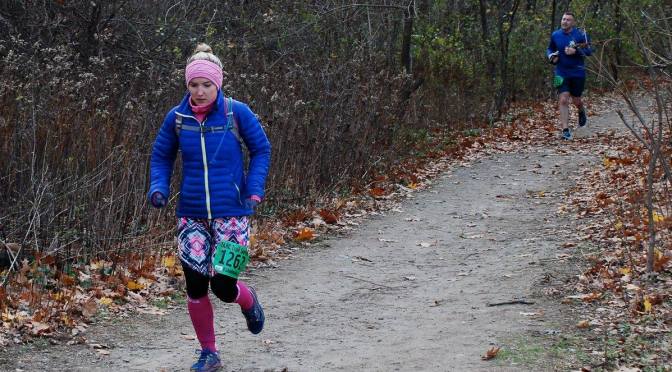 The temperature inched closer to 90 degrees as the noon hour approached at the East End Trail Races. It was Sunday, Aug. 5, and it was another scorcher.

Around 135 runners were taking part in the inaugural event at Borderland State Park in Easton, Mass., most of them in the 30K and 10K races. Seventeen runners toed the starting line of the 50K ultramarathon that muggy morning, armed with the knowledge that tough miles were ahead. They had to complete five trips around a “heavy” 10K loop that measured around 6.7 miles, making it a 33.5-mile race.

By 1 p.m., four of the ultramarathon runners had called it a day and 13 were still on the course. Charn McAllister was the frontrunner by a comfortable margin and appeared to have the overall victory in hand. The 35-year-old resident of Norfolk, Mass., was three minutes off the lead after the first loop, but he had moved to the front during his second trip around the course before steadily pulling away. McAllister faded a bit as the miles added up and the day got hotter, but not by much given the conditions. His closest competitor of all the runners – 30-year-old Billy Jenkins of Malden, Mass. – was more than 17 minutes back after four laps and losing ground. The third overall runner was almost six minutes behind Jenkins and trailed McAllister by more than 23 minutes.

Surprisingly, the third runner to finish four loops was the first to reach the finish line. Less than 58 minutes after starting her final loop, Maude Gorman crossed the finish line in 5:53:15. It appeared she had not only erased a hefty deficit, but also amassed a comfortable lead. McAllister finished eight minutes later in 6:01:18.

The timer called over the race directors from Northeast Race Management, LLC. Something didn’t seem right.

“We had suspicions from the get-go,” race organizers told MassUltra. “But we needed to take a step back.”

DIGGING INTO THE DATA

There was little time to address the situation in the moment at East End because organizers had other runners to tend to on that sweltering Sunday. In the hours and days that followed, however, they did their due diligence. They analyzed lap splits, pored over photographs, talked to race staff and built a comprehensive picture of what happened.

Ultimately, the splits told what they were convinced was a definitive tale: Gorman didn’t run all five laps as designed. The stats were striking. Her first 6.7-mile loop registered a time of 1:13:38 (ninth place overall), followed by a 1:24:25 second loop (11th place). A 52:48 third loop – the fastest of the day by any 50K runner by far – saw Gorman leap into second place behind McAllister. Her fourth lap split of 1:25:05 knocked her back into third place overall and 23:12 behind McAllister. An eye-popping 57:19 on her final lap – the second-fastest split of any 50K runner all day – placed her eight minutes ahead of McAllister for first place overall.

A decision was made to disqualify Gorman, 24, of Hingham, Mass., pending her ability to provide sufficient documentation that she ran the proper course. Organizers requested GPS data from her that would show mile splits, the course run, time/date, and other standard information available from a GPS watch. The documentation organizers said was provided by Gorman lacked that detail, making it impossible to verify her result.

MassUltra attempted to contact Gorman multiple times for comment for this story over the course of four days (Aug. 9-12), but those attempts were unsuccessful. This story will be updated if a response is received.

As the East End investigation was underway, it turned out the same runner’s performance at the Pineland Farms 50-miler on May 27 in Maine had also been called into question under similar circumstances. Gorman had stood on the podium as the second-place female finisher in 7:43:51, 12 minutes behind first-place finisher Sarah Pandiscio (7:31:36) of Charlestown, Mass.; 25 minutes ahead of Lori Wetzel (8:08:20) of Danvers, Mass.; with Mont Vernon, N.H., resident Yuki Chorney just off the podium in (8:14:38). The women’s field that day was talented and tough, but Gorman’s time stood out from the ultramarathon veterans around her – and not in a good way.

“We were brought to the attention of Maude Gorman’s course cutting by a number of participants who also competed with her at this year’s GiddyUp Trail Running Festival at Pineland Farms 50m, who stated that they passed her multiple times throughout the race but did not see her pass them in return,” Ken Krogsrud of GiddyUp Events and course director for the Trail Festival told MassUltra in an email. “With aid stations and bathroom breaks, you’re bound to leap-frog runners and possibly miss a few people in the mix; initially I thought this could be the case.”

A discussion with the event’s timing company changed his mind.

“We obtained raw data segments from her laps on the course,” he said. “The timing company concluded that her laps were unrealistically fast in two spots, between mile 18.1 to 29.3 and between mile 33.6 to 44.8.”

The Pineland Farms course is a lopsided figure eight that involves three loops and three additional miles. During the segments that were red-flagged, Gorman’s average pace was 6:04 and 5:17 per mile. On all other segments it varied between 10:36 and 16:32 per mile.

Gorman was asked by race officials to provide proof of her run. Photos showed her wearing a Garmin 15 watch during the race.

“She responded by stating she did not use the GPS function on her watch but sent a picture of her total distance only (same picture she posted on her social media/Instagram),” Krogsrud noted. “I asked that she send me that data [and] more from this picture; she replied that she could not and that it was an issue on our end. We had no other issues with timing mat data in this regard at the race, with exception of hers.”

A discrepancy in her story raised additional suspicion. The photo of the watch provided by Gorman indicated she completed 52.09 miles, contradicting her statement that she had not used the GPS function.

“Finding that she did have a GPS tracking watch and she somehow attained 52 miles on it but with no other data to accompany it, then later stating she indeed did not track it, I decided that the picture sent to me was insufficient proof and likely a lie,” Krogsrud said.

The East End and Pineland Farms organizers spoke on Wednesday, Aug. 8, and compared notes. Then they went public.

The disqualification at Pineland Farms was announced shortly after the phone call ended. 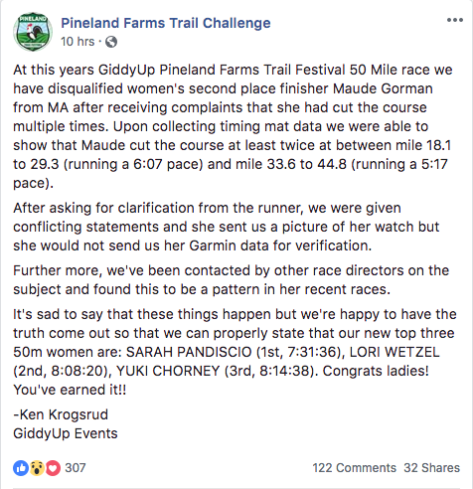 That night, the East End results were amended on UltraSignup. Shortly after noon on Thursday, Aug. 9, Northeast Race Management, LLC also made a public statement.

Both races explained the lengths they went in order to verify information and allow the runner to provide data that might validate her performance. Both also amended their official results and publicly recognized the updated podium finishers. That meant Chorney joined Pandiscio and Wetzel on the podium at Pineland Farms, while McAllister was the overall first-place finisher at East End and Lepniakova was the women’s champion at East End with Gail Martin of Sharon, Mass., taking second.

Both organizations notified Gorman that she isn’t welcome to participate at their future events.

The fallout didn’t stop with the removal from results. Gorman had been slated to be a part of Team USA at the Skyrunning World Championships in Scotland later this year. Word spread that the U.S. Skyrunning Team was evaluating Gorman’s status following the Pineland Farms announcement, and ultimately the U.S. Skyrunning Team confirmed to MassUltra on Thursday, Aug. 9, that Gorman “has been expelled” from the team. Also Thursday, Seven Seas Roasting Company removed Gorman from its team of ambassadors after the California small business was harassed on social media for its ties to Gorman.

The need to investigate race results and the attention that has come along with it have been great causes of frustration for the organizers of both races. It’s something they hope to help other race organizations avoid.

“I felt this was an on-going problem in our small and tight-knit community,” Krogsrud said of his reason for making his findings public.

Moving forward, there may be tangible lessons that race organizers can take from this story and apply to their events in order to either avoid a similar controversy or arm themselves with sufficient data to make a well-informed ruling should the need arise.

“If you want to protect the integrity of your race make sure you have proof of completion or cheating with timing mats, photos, reliable witnesses, or even check points on the course,” Krogsrud recommended. “Most people are dependable in this community but obviously not all, this is nothing new to any race director.”

Pineland Farms had multiple timing mats on the course that allowed for analysis of specific segments and a more detailed breakdown of each runner’s time. East End had an experienced manual timing team at the start/finish that was able to provide lap-by-lap analysis. Both races had numerous volunteers on course, some as spotters and some as aid station workers.

For Northeast Race Management, additional trained on-course staff may be added at future events to monitor runner progress at checkpoints and protect against potential course-cutting.

If a similar situation does arise again, it bears repeating that both organizations made the effort to publicly recognize the runners they determined belonged on the podium. That gesture was warmly received on social media from a community that appreciated the attempt to “make it right.”

While additional steps can be taken to try to lower the chances of suspected course-cutting, the greatest source of accountability falls to the runners themselves. By sticking to the course, retracing steps to the last known marking if a turn is missed, and using a GPS watch or app that can validate a performance quickly—should the need arise—controversial results are largely preventable. And if a mistake is made, own it, learn from it and move on. Ultimately it comes down to this: run an honest race, regardless of pace or place.

*Editor’s Note: This story was updated at 10:38 a.m. Monday, Aug. 13, to correct that East End had a manual timing team at the start/finish rather than timing mats.

While MassUltra has not received a response to interview inquiries from Maude Gorman for the original story, on Tuesday, Aug. 28, Gorman gave her side of the story in an Instagram post where she admitted that she knowingly cut the course at Pineland Farms and accepted the second-place award anyway.

“Back in May, I ran a 50-mile race and received 2nd place on the podium,” Gorman wrote. “However, I accepted that 2nd place finish after I knowingly missed approximately 12K (7.45 miles) of the course. If you were to ask me why, why I did it, I truly wouldn’t have an answer for you. Why would I run 43 miles of a 50-mile course and essentially ‘give up’? Why wouldn’t I just finish the damn race (and honestly) at that point? I don’t have an excuse, but what I do have is an apology. An apology to the women who DESERVED to be on that podium, and apology to every person who finished that race, an apology to the race director for my dishonesty, an apology to my sponsors for representing them in a poor light, an apology to my former teammates on the U.S. Skyrunning Team for receiving backlash because of me.”

Gorman’s full apology is included in the image to the right.

Gorman also has been alleged to have cut the course at the East End 50K, and she was disqualified from that race under similar circumstances to Pineland Farms. There was no mention of East End in her statement.