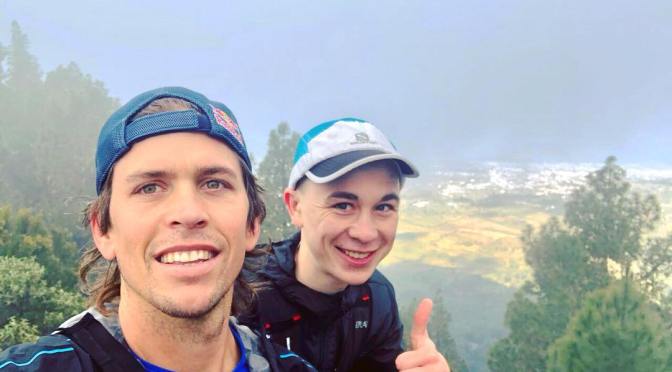 Ever since he burst onto the ultrarunning scene in September 2015 as a precocious 18-year-old at the TARC Fall Classic 50-miler, many in New England wondered how long it would take for Patrick Caron to showcase is talent on a larger stage.

Caron followed up his runner-up performance at the Fall Classic—a rare non-win on his now lengthy ultramarathon resume—with nearly two dozen more ultras, and he won almost every time. All but his 100-mile debut—a runner-up finish at the 2016 Eastern States 100 in Pennsylvania—were in New England, and he established numerous course records along the way. His performances at the Ghost Train 100 in 2016 and 2017 both landed among the fastest men’s 100-mile performances in the United States each year. Caron’s star was rising high in the Northeast, and in 2017 the legendary mountain running brand—Salomon—took notice. It invited Caron to its Young Guns Academy in Austria, and in January 2018 Salomon officially welcomed Caron onto its team as a professional athlete.

Caron kicked off his Salomon career with a pair of 5K victories in January and February, and then won the Black Cat 20-miler in March before throwing down a 2:47:13 in a downpour at the Boston Marathon in April, followed five days later by a course-record performance in the marathon at the TARC Spring Classic. In the weeks that followed, the now 21-year-old native of Needham, Mass., turned his focus to his first major international race for Salomon—the highly competitive Transvulcania 74K Ultramarathon on Saturday, May 12, on Spain’s La Palma Island.

Caron arrived on the island six days prior to the race and spent his days exploring the course, socializing with world-class runners, and soaking in a pre-race atmosphere that reminded him of an event close to his home and his heart.

“Transvulcania is like the Boston Marathon of ultras,” Caron noted. “The hype surrounding this race was like nothing I’ve ever experienced before in the trail world! The atmosphere on the island preceding the race had an awesome buzz to it; from gathering for the elite photos and interviews to meeting runners from all over the world and sharing stories in the hotel lobby and lounge, it was a really exciting race to be a part of.”

Caron escaped the buzz of the crowds by exploring the course with some of his new teammates, including three-time women’s champion and course record-holder Ida Nilsson of Sweden and defending Western States Endurance Run champion Ryan Sandes of South Africa, who was also Caron’s roommate on the trip.

“Being a part of the Salomon team and the camaraderie and team spirit that came along with that made my experience at Transvulcania so special,” Caron said. “Traveling internationally was definitely something I was nervous about and not at all used to, but sharing a room and rental car with Ryan Sandes gave me the chance to learn from and listen to someone who has been competing and traveling as a professional runner for 10-plus years – and of course excelling at it!

“In the days leading up to the race, I was lucky enough to join many of my other Salomon teammates on runs around the island and chat with them about life, training, and race strategy.”

While Caron enjoyed having multiple days to explore the race course beforehand to get a feel for the trails and the terrain, he admitted he may have enjoyed it a bit too much. In the five days leading up to the race, he said he accumulated about 16,000 feet of vertical gain. That meant his legs weren’t quite as fresh by the time he toed the starting line to run 46 miles with 14,271 feet of climbing and 13,310 feet of descent.

On race day, however, Caron’s greatest challenge wasn’t weary legs. Instead, it was a rebellious stomach.

“Unfortunately, for me, I started feeling very sick the day before the race, and woke up at 2:30 a.m. feeling even worse,” he said. “My stomach was fighting against me, and I was feeling very nauseous. I chalked it up to a combination of international travel combined with all the new food being incorporated into my fairly strict diet, although later I was informed it was highly recommended to avoid drinking the tap water, and I happened to be drinking it all week as a way to save money and avoid waste.”

Caron was forced to reevaluate his race goals while riding the bus to the starting line. He originally had hoped to finish in less than eight hours, a time that race history indicated would place him in the top 15 in a field of nearly 2,000 runners.

“On the bus ride to the start, I knew my previous goals had to be set aside, leaving only one goal: make it to the finish line in Los Llanos no matter what,” he said.

Caron funneled into the elite corral at the front of the field for the 6 a.m. start, and he was captivated by the energy at that early hour. Music blared, runners buzzed with enthusiasm and nervous tension, and fans crowded around the runners and lined the early stretch of the course. It was an environment completely new to Caron at an ultramarathon, and the scene once again reminded him of the Boston Marathon.

The enthusiasm of the crowd continued as the race unfolded. Crowd support helped Caron stay positive as he fought off his angry stomach and navigated technical climbs.

“In terms of spectators out on the course, you couldn’t go more than half a mile without seeing someone,” he recalled. “The streets and trails were lined with people screaming, ‘Venga! Venga! Venga!’ or ‘Animo!’ or ‘Vamos chico!’ What made it even more meaningful and special was to think that many of the people cheering us on probably had to hike out at least a mile or two just to get to their viewing spot, and it’s not the easiest terrain to travel over!”

Pere Aurell Bove of Spain won the race in 7:37:26, holding off Russian Dmitry Mityaev by almost a minute. Thibault Garrivier of France rounded out the men’s podium in 7:42:49. The top 10 runners finished in less than eight hours, including top American finisher Morgan Elliott who finished ninth in 7:54:22. Other top Americans were Watson in 12th (8:07:58) and Cody Reed in 13th (8:14:18). Ida Nilsson of Sweden was the women’s champion for the third straight year in 8:40:43, good for 25th overall. Monica Comas Molist of Spain was the ladies’ runner-up and 28th overall finisher in 8:46:57, and American Kelly Wolf rounded out the women’s podium (30th overall) in 8:49:45.

Caron finished 50th overall and 45th among the men—including fifth among the American men—in 9:14:57. There were 1,374 finishers within the 17-hour time limit.

Caron wasn’t the lone Massachusetts resident to compete at Transvulcania. Scot DeDeo, 37, of Belmont, also turned in a solid effort in his first trip to Transvulcania, placing in the top 30 percent of the overall field. DeDeo tied for 483rd overall in 12:28:49 and was 448th out of the 1,490 men who started the race. The race was DeDeo’s first major outing of 2018 after taking third in a tune-up race at the To Hale and Back 6-Hour in March. It was also his longest race since he delivered a top-10 performance at the Hennepin Hundred in October 2017.

“It’s devastating when you so badly want to show the world what you think you’re capable of, but things outside of your control work against you,” he said. “Although I wasn’t able to enjoy the race to the extent I had hoped, there was a lot to appreciate and learn along the way, and it’s given me a good reason to go back!”

Transvulcania was the first of what Caron hopes will be many opportunities to run in spectacular places around the world, and the trails on the island of La Palma and the people he met along the way provided an unforgettable first step in the next chapter of his career.

“Considering the race itself was pretty miserable for me due to how sick I was feeling throughout it, my favorite memories of Transvulcania are of the extraordinary views that helped distract me and push me forward,” he said. “From the fireworks and mile-long string of headlamps on the beach during the start of the race to reaching the top of the first 6,000-foot climb and being greeted by the sunrise and a sea of clouds, there was always something around each turn that left me awestruck and thinking about how grateful I am for the places running has brought me and for the amazing people who are now part of my life.”

2 thoughts on “Going Global: Transvulcania Kicks Off Next Chapter of Caron’s Career”