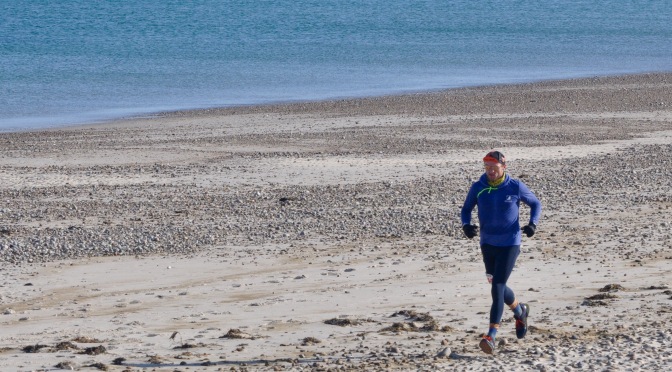 BARNSTABLE, Mass. – The sun was already shining high above Cape Cod Bay when the cars started trickling into the parking lot at Sandy Neck Beach. It wasn’t long before the lot was nearly full of cars, many adorned with bumper stickers boasting of the long distances the drivers had run, races they’d conquered, or mountains they’d climbed.

On this day, however, they weren’t here to earn another sticker or shiny medal. Instead, they were in Barnstable to log some long miles, gauge their levels of toughness and grit, and enjoy a hearty supply of camaraderie.

Since its humble beginnings with just seven runners in 2007, the Cape Cod Frozen Fat Ass 50K has become a running family reunion of sorts. Through the years, it has grown in numbers while maintaining a loyal following of long-time regulars. On Saturday, Jan. 27, for the 12th annual event, 70 runners gathered on the beach to tackle one or two 25K loops on the sand.

The course was in good shape, save for a section of trail that was still flooded from a recent storm, Race Director Bob Jensen informed the runners. It was typically windy, but the sun was shining and there were only a few clouds in the sky. The stage was set for it to be a spectacular day on the sand.

“Get ready …” Jensen shouted, and then thrust his right fist into the air. “Go!”

With that, the pack surged forward and headed down the beach. The runners quickly separated into small packs, chatting and laughing as the miles clicked by.

As the runners tackled the early miles, Jensen retreated to the Sandy Neck Beach Snack Shop that served as race headquarters. His wife, Fiona, was busy transcribing runners’ information onto a spreadsheet for results, so he went to work on finishing the quahog shell finisher’s awards, the contents of which had gone into homemade chowder for the runners.

“We didn’t have this nice building when we started,” Jensen said. “We just had a trailer in the parking lot as our headquarters.”

He recalled a few years prior when the race began with six inches of snow on the beach, all of which turned to slush when a downpour struck mid-race. Fiona recalled a year when it was four degrees before factoring in the wind chill.

“We might not have mountains, but it’s still tough running,” Jensen said. “It’s tough to run in this stuff.”

That tough running – in the sand, in a constant wind blowing off the ocean, and in whatever other winter weather-related elements there might happen to be – was part of the point behind the race. He said the race was the brainchild of a group of guys on the Cape who ran trails and decided they should put on a race.

The Jensens have enjoyed sharing Sandy Neck Beach and the Cape Cod ultrarunning experience with so many runners – so many friends – through the years as the race has grown. They have so many regulars like Scott Deslongchamps of North Grosvenordale, Conn.; Leah and Peter Lawry of Charlestown, N.H.; and Kevin Mullen of Fairhaven, Mass., a barefoot runner who pronounced Sandy Neck Beach as “the most barefoot-friendly course around!” Fred Murolo’s always here; he has made the annual trip from Cheshire, Conn., to become the only runner to complete the 50K race every single year. They enjoy welcoming newcomers, too.

The Jensens and their friends at the Cape Cod Ultrarunning Society have created an event that’s distinctly Cape Cod and unlike any other race in Massachusetts.

As Jensen put the final touches on the finisher’s awards, the first runners checked into race headquarters with the completion of their first trip around the course. Some headed out for more while others called it a day. The mashed potato-like sand caused a few runners to have Achilles flare-ups and hamstring strains, and some decided their faces had been exfoliated enough by 20-mile-per-hour blowing sand.

Billy Hafferty, a Boston resident who grew up in nearby Sandwich, Mass., was the first runner to head back out for a second loop, and that caught him by surprise after logging most of his first 15.5 miles with Deslongchamps and Eric Macklin of Wayland, Mass.

“The whole loop we just had some awesome ultrarunning conversation; you just get kind of wrapped up in this immediate friendship, which is why I started running long distances,” Hafferty said. “We all checked in, and when I went to start running again I asked if they were going back out and they said no. That was like the start of the run for me.”

Hafferty was far ahead of the field, so he spent his entire second loop running solo and reminiscing.

“I was saying to the race director, being back on the beach was just kind of funny, because you pass all these spots that you used to go in high school,” he said. “This place in the summers was our stomping grounds, so it was cool to be back – especially running alone. It was good to run it with the guys, but I’m kind of happy I got a lap to myself because you see more, I think. It’s nice to bond with people, but there’s a magic about running alone.”

While Hafferty led the men’s field by a comfortable margin, that wasn’t the case for the women as two former champions and a first-time ultrarunner were in close competition throughout. Just five minutes separated 2014 winner Kelly Manchester of Fairhaven, Mass., 2016 and 2017 winner Leah Lawry, and newcomer Caroline Atwood of Somerville, Mass., at the halfway point. Manchester – who made her 50K debut at Cape Cod four years earlier – led the race nearly wire to wire. She ran the first loop solo and eventually settled in alongside Atwood briefly around mile 22 before pulling away. At that point, Lawry was about 10 minutes back, running solo and closing strong. She soon passed Atwood and took off in pursuit of Manchester. As it turned out, Manchester was beginning to feel the effects of the sun exposure and a lack of hydration.

“I didn’t bring any water with me, which was stupid,” she said. “So on Trail 5 where it’s all icy, I was just breaking apart ice and eating what I could.”

After spending about five miles winding through a series of trails, the final four and a half miles of the course take runners down the beach. That’s where the race truly unfolded. A few minutes after Manchester hit the sand, she started looking back and eventually saw Lawry in the distance.

“I saw someone behind me,” Manchester recalled. “I wasn’t seeing straight, but I could tell that person was going pretty steady, so I wanted to at least try to stay ahead of her.”

With each passing mile, Lawry inched closer. Still, Manchester pushed on, fighting the sand and a nasty side wind that had begun whipping stronger. The home stretch would be a battle, she knew, but she was ready for it.

“The first time (in 2014) I started to cry on the beach because I was like, ‘Where’s the finish?’” she said. “This time I knew not to expect anything.”

Soon, the rooftop of race headquarters came into view. Lawry was within 50 yards, but Manchester dug a little bit deeper and made one last push. She dashed up a wooden staircase and into the parking lot toward the Sandy Neck Beach Snack Shop. The lead was down to 25 yards when Manchester reached the snack shop stairs, climbed them, raced across the deck and opened the door to officially check in at the finish with a winning time of 5:32:40. Lawry checked in just seconds later to secure second place in 5:32:45.

After finishing, runners huddled at race headquarters to warm up, rehydrate, chow down on chowder and other snacks, and share stories from the day.

“My hat blew into the ocean!” Lawry said with a laugh, noting that she went into the water to retrieve it. Rives laughed in agreement. He’d battled the wind, too, and the layer of sand still caked on the left side of his face was evidence.

There were plenty of laughs, hugs and handshakes before the runners gradually wandered out to their cars and headed for home. The conditions on the Cape had been mostly forgiving this year, the running tough, and the company magnificent.

For Hafferty, the day had been an unexpected success. He decided the night before to come to the race and invited a few friends along for the journey. By the time he’d completed his two loops of the course he’d made new friends, reacquainted himself with hot spots from his childhood, and earned a win. His heart was happy as he headed home.

“It was a good day,” Hafferty said, smiling as he looked out at Cape Cod Bay. “It’s just funny how sometimes in the running world you just get what you need. I sent my friends a text around 6 or 7 p.m. (last night) and said I’ll pick you guys up at 6, so I’m up at 5 and out the door at 5:30 (this morning), but that’s how the best things happen in the running world anyways. It was just a cool day; it meant a lot.”

One thought on “No Freeze, but Plenty of Chill at the Cape Cod Frozen Fat Ass 50K”