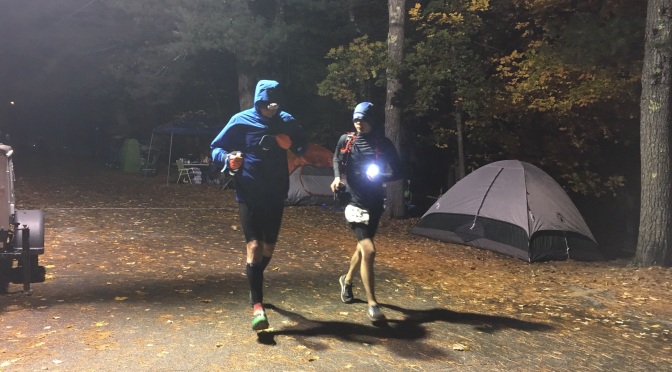 BROOKLINE, N.H. – The faint glow of a flashlight beam shook in the distance with each smooth, deliberate swing of Patrick Caron’s left arm.

Flanked by his pacer, Michael Franzino, who had just run the past 15 miles with Caron, the pair cruised into Camp Tevya, the official start/finish point for each out-and-back of the Ghost Train Rail Trail Races on Oct. 22-23. Caron was 90 miles into his 100-mile race, and far ahead of course-record pace.

To add a little more symbolic sizzle to what had already been a course-scorching performance, Caron picked up a new pacer for the home stretch.

“I had Bacon Man pacing me,” Caron said with a laugh.

Sure enough, Henry Ward – Caron’s good friend and frequent training partner – paced Caron for the home stretch while dressed from head-to-toe in a bacon costume. Together, they cooked up a fast final 10 miles that culminated with Caron cruising across the finish line in a time of 14:51:21, nearly an hour ahead of Robert Ashby’s old course-record time of 15:49:04 from 2015.

Caron said he had three goals for the race: finish in less than 15 hours, set a new course record, and win the race. The 19-year-old resident of Needham, Mass., accomplished all three.

“I was pretty pumped about it,” Caron said of achieving his goals. “It was really great. Everyone there is super-supportive, and everyone cheers for everyone, so it was really cool coming in (to the finish line). It was like, ‘Wow, what an adventure! What a day!’”

Caron wasn’t sure what to expect when he first arrived at Camp Tevya to race along the mostly flat, well-groomed course that goes out and back along a 7.5-mile stretch of the Milford and Brookline Rail Trail. He anticipated competing with Jake Dissinger, 34, of Leeds, Mass., since Dissinger was the 2015 Ghost Train runner-up in 18:20. Dissinger had opted to drop down to the 30-mile race, however. Rather than racing each other, they instead served as de facto pacers for each other during the first two out-and-backs.

“That was really great,” Caron said of sharing miles and conversation with Dissinger. “Right from the beginning we just ran together and were chatting, and the miles kind of flew by, which was nice. I think we went through 15 miles in 1:46, and I remembered looking at the splits from last year’s winner (1:57 for the first 15) – and I thought that was fast! We were consistently going under a 7:30 pace; there were a couple of sub-7-minute miles.”

The fast early miles had Caron well ahead of his planned pace, but his legs felt fresh so he didn’t back off much. Alexander Jinks, 30, and Lance Parker, 22, both of Montpelier, Vt., hung close early, but eventually drifted back and never threatened to overtake Caron.

Caron rolled through mile 60 in 8:09 and mile 75 in 10:36. That’s when Franzino hopped in to pace. Caron and Franzino connected through social media shortly before the race when Franzino was hoping to find a runner to pace for some nighttime miles. Caron said it was a good pairing as Franzino had a bright headlamp and kept him in a 9- to 10-minute mile pace. After their out-and-back, Bacon Man escorted Caron to the finish line to close out a successful race.

“It was pretty awesome, and I was thrilled with how it went,” Caron said. “Even though I didn’t stick to whatever plan I originally had which was to go out at a more consistent pace, I really didn’t lose my pace too much and I kept it pretty consistent in the late miles.”

While Caron ran away with the victory, the runners closest to him held their ground near the front. Jinks and Parker preserved their positions in the top five, with Jinks taking second in 17:10 and Parker finishing fifth in 19:47. Finishing between them were a hard-charging Claire Gadrow and a consistent Scott DeFusco. Gadrow, 47, of South Kingstown, R.I., was in the top four the entire day. She closed hard during the final 10 miles, erasing 28 minutes off of Jinks’ 29-minute advantage before finishing in 17:11. Meanwhile, DeFusco, 40, of Beverly, Mass., spent the entire day in the top 10, and he ran the second-most consistent splits of the front-runners, gradually picking his way through the field before finishing fourth overall in 19:12:15.

For full results of the 100-mile race, click here.

The 75-mile distance was dominated by the ladies. Of the 17 runners who recorded official finishes at the distance, 11 were female – including two from the Bay State.

The overall 75-mile champion was 35-year-old Diane Keenan of Wallingford, Conn., who covered the distance in 14:22:00, more than two hours ahead of the runner-up.

For full results of the 75-mile race, click here.

Massachusetts was well represented in the 60-mile race as nearly half the field – 18 of 40 finishers – hailed from the Bay State. None were faster than 58-year-old Greg Stone. The resident of Falmouth, Mass., cruised through the first 15 miles in 2:14, and lost only a few minutes on each subsequent out-and-back. His consistent performance led to a dominant victory in 9:50:00.

Jordan Grande, 25, of Enfield, Conn., was the women’s champion and third overall in 11:41. Erin Tiernan, 37, of Oak Bluffs, Mass., claimed third-place female honors and seventh overall in 12:52:00. The fourth-place female finisher, 42-year-old Nicolle Quinn of Beverly, Mass., was the final Bay State resident in the top 10 as she placed ninth overall in 13:02:00.

For full results of the 60-mile race, click here.

Of the 68 finishers of the 45-mile race, 31 were Massachusetts residents. The top Bay State finisher – Haverhill, Mass., resident Shannon Hanson – was the fourth overall finisher. Hanson, 40, secured second-place female honors in 8:26:00, trailing only overall winner Megan Valentine, 37, of Jericho, Vt., who earned the victory in 6:45:00. Auburndale, Mass., resident Melissa Arnold joined Hanson in the top 10 overall as she finished in 10th place and earned fourth-place female honors in 9:38:00.

The lone Bay State resident to crack the overall top 10 from the men’s side was 27-year-old Evan Moreshead of Somerville, Mass., who placed eighth overall in 9:28:00.

For full results from the 45-mile race, click here.

The victory was Dissinger’s third of the year in an ultra race. He previously secured overall wins at the Jack Bristol Lake Waramaug 50K in April and the Manchester 2 Monadnock 55-miler in May before placing ninth overall at the Vermont 100 in July.

Meanwhile, the women’s champion also set a new course record. Deirdre Lowe, 37, of Salem, Mass., finished third overall in 4:09:00 and broke Laura Perry’s old course standard from 2014 by nearly 10 minutes. The victory was Lowe’s second of the year as she also was the women’s champion at the TARC Summer Classic 50K in August.

The second-place female, 32-year-old Dana Maringo of Medford, Mass., recorded the fourth-fastest time ever by a female for the 30-mile race with her time of 4:37:00. Maringo finished sixth overall. Joining Lowe and Maringo on the course record-board was the eighth-place overall finisher and third-place female, 39-year-old Alicia Eno of Shrewsbury, Mass., whose time of 4:52:00 was the seventh-fastest in race history by a female.